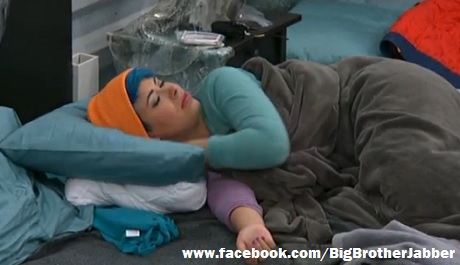 For those of you who watch the Big Brother season 16 LIVE feeds, then you’re already up to date on some of the action and drama that’s been under way in the house. Alliances are being formed left and right, friendships are being taken to cuddly (perhaps romantic) extremes, and the first Power of Veto meeting has officially taken place. For those who are behind the times (or have steered clear of any spoilage), Donny Thompson ended up winning the golden Power of Veto — and it was pretty obvious that, even before the meeting took place, that he’d be removing himself from the chopping block.

Honestly, I would’ve been VERY surprised if he hadn’t. Caleb, Zach, Devin, and Frankie all wanted Donny evicted, so saving himself with one of the most coveted prizes in the Big Bro game was not only a smart move but a necessary one.

To give you a brief recap: HOH Caleb Reynolds nominated Donny Thompson and Paola Shea; HOH Frankie Grande nominated Brittany Martinez and Victoria Rafaeli. However, Brittany and Victoria proceeded to win the Battle of the Block competition, which stripped Frankie of his HOH title. Boom! Just like that. Never a dull moment in the BB House. In the end, Cody Calafiore, Victoria, and Zach Rance were selected for the POV competition — and they competed alongside Caleb’s original nominations.

With Donny having removed himself form the chopping block, Caleb then had to put up a replacement nominee. He decided to put up Joey.

The nominees now up for eviction are now Paola and Joey

Make sure to keep checking CDL for all of your BB16 spoilers, previews, and recaps.