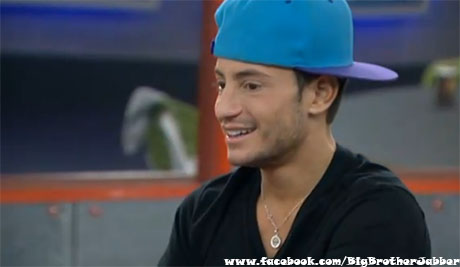 Big Brother season 16 spoilers tease that on Thursday, August 21, Week 8 of the CBS reality show will come to a close and the houseguests will vote to evict either Zach or Cody. Week 8 began with two HOHs, and after the Battle of the Block competition, Frankie Grande was the reigning HOH, and Cody and Caleb were up for eviction. Frankie turned around and won the Power of Veto as well, and used the POV to save Caleb. He back-doored his old BFF Zach and put him up on the chopping block in Caleb’s place.

Going in to the live eviction on Thursday, July 20th, Zach knew that his odds were not good. However, he made a few attempts at campaigning to get enough votes to stay in the house, and has been spending a lot of time talking to Donny. Even if Donny and Zach decided to suddenly wake up and smell the coffee and try to take down the Bomb Squad/Detonators/Whatever They Are Calling Themselves Now alliance, it really is too little too late and they are seriously outnumbered.

Big Brother 16 spoilers tease there will be a silver lining to the Week 8 eviction ceremony. If Zach is evicted (and he most likely will be), he will have an opportunity to compete against Hayden, Nicole, and Jocasta for a chance to head back into the Big Brother house and try again for the half a million dollar prize.

So, BB16 fans, now is the time to get your predictions in. Who do you think will be evicted? Zach or Cody? And who do you think will win the juror competition and walk back through the Big Brother doors? Share your theories in the comments below and don’t forget to check CDL tomorrow for more BB 16 spoilers.

Update: Zach has just been evicted as we predicted – will he make it back into the Big Brother House through winning the Jury Competition?

Update: Nicole is back in the house! She won the Jury Competition!

Update: Cody is week 9 HOH and will nominate Nicole and Donny – read all the details here.