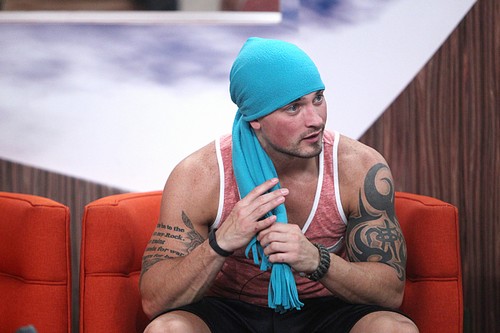 Big Brother 16 has been extremely predictable in recent weeks and the latest news on Week 10 Head of Household Competition is nothing groundbreaking by any means. After evicting Donny and leaving Nicole as the only non-alliance member, the writing was on the wall as to what was coming. Sure enough, Nicole was unable to win the HOH and flip the power in the house leaving herself ripe for the picking when nominations are announced. Caleb slid to an HOH win by a few seconds over Christine.

When it was revealed that the HOH comp was the slide and pull the ball out game of endurance, I actually thought Nicole might have a chance. The game is about as fair as it can be for all contestants and Nicole had as good a chance as anyone. Unfortunately, she was unable to even come close. Caleb and Christine dominated the comp along with Frankie not far behind. Ultimately, the power in the house remained the same.

If anyone were going to win other than Nicole I would hope for Caleb I guess. At least with Caleb you know he will be looking to do something unusual. Caleb has a good bit of Devin-like explosiveness in him and I can totally see him going nuts with the power. Perhaps he will shock us all and nominate someone like Frankie or Derrick. I am not expecting that, but it could happen if someone says something to upset him.

Caleb is likely going to put up a couple of the remaining women with Nicole and Christine being at the top of the list in my eyes. Though Christine is a “member” of the alliance, the status is a tenuous one. Christine is viewed as expendable by all of them and I can totally see Nicole worming her way into that position instead. Victoria is around simply because everyone wants to end up standing next to her at the final.

If Nicole were able to see it, Derrick could bring the axe down on Christine. She should get in Derrick’s ear about Christine and work on him. The problem with this is that she has no idea of Derrick’s frustration with Christine. It is one of those things that we can see but the player simply has no idea about. Perhaps some in depth talks this week can help her to discover some important facts. Christine is definitely the weak link in the group to go after. If she can give them a good enough reason, they will let Christine go ahead of Nicole.

Whatever the case, the coming week is bound to be more of the same unless Caleb loses it. At least he is the one guy that might could do exactly that.

Update: As we predicted Christine and Nicole were nominated for eviction by HOH Caleb.