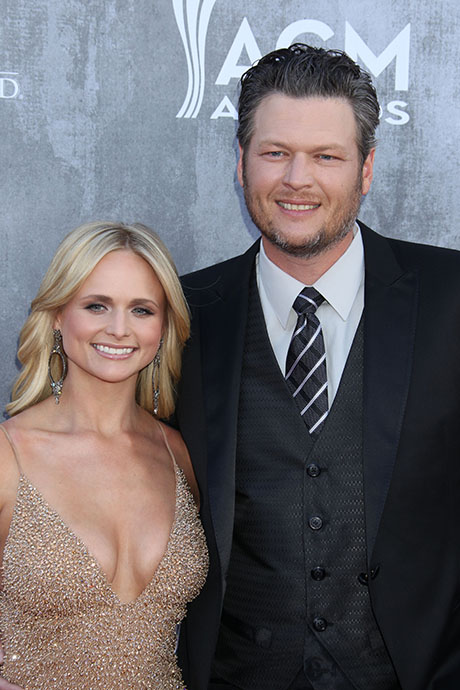 Miranda Lambert and Blake Shelton went for excessive PDA at the CMT Music Awards, which almost every outlet covered and ooh’d and ahh’d over. Look at the adorable couple, aren’t they adorable? They’re holding hands! They’re kissing! And so on it went, the entire night.

Miranda kissed Blake when she won Best Video of the Year, and every time the camera panned to them, they were dancing with each other or kissing or smiling at each other. Seriously, what’s with that?

Look, some couples are just like that, right? They can’t keep their hands to themselves and they’re always excessive with the PDA. However, Blake and Miranda were never really that couple, barring a few occasions here and there. They’ve never been prone to overdoing the public displays of affection, which is why this particular night seemed more contrived to me. Their affection didn’t seem natural, and instead came off as being stiff and affected.

Maybe that’s just them — or maybe it really was put-on for show. Miranda and Blake have had to battle a lot of divorce rumors lately, and whether the rumors are true or not, it must be annoying to them that the tabloids are constantly writing about them. So they decide, to heck with it, we’ll prove them wrong at the CMT Awards. They decide that they’ll show the whole world how in love they really are by going overboard with the kissing and cuddling and the affection, not realizing that by acting so different, they’re actually calling more attention to their relationship than before.

Or heck, maybe Miranda Lambert’s pregnant. It’s hard to say anymore, especially since both Miranda and Blake have been making a noted effort to stay out of the spotlight recently.