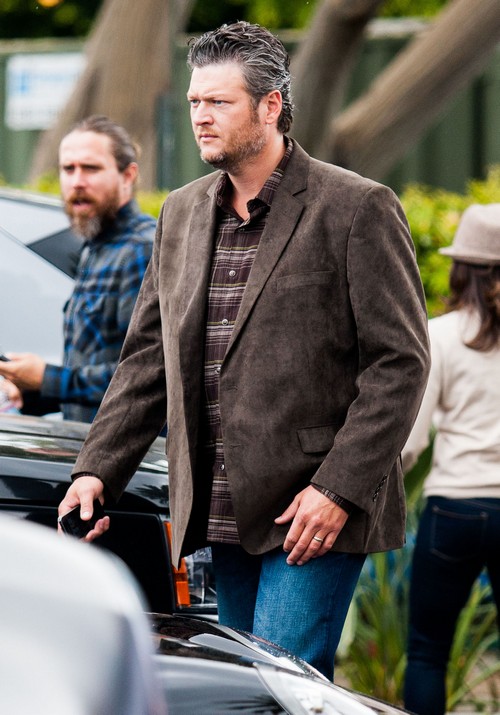 According to a recent report, Miranda Lambert is planning a break in her tour to get pregnant with Blake Shelton‘s child. Do celebrities actually take breaks from such important, career-making events to make a baby? I feel like this only happens in the tabloid world, because why can’t Miranda wait until after the tour to commence the baby-making?

Well, based on the report, it’s because she’s afraid that Blake Shelton will leave her, and having a baby is the only way to get him to stay.

A source ‘close’ to the couple tells the National Enquirer, “Miranda has run out of options for saving her strained marriage. It’s like they were one step away from divorce court. Blake has been begging for a baby forever, and Miranda finally gave in. She’s telling friends that she’s actively trying to get pregnant right now.”

Uh-huh. And is Miranda ‘actively’ trying to get pregnant while she’s on tour and while Blake is in Los Angeles for The Voice? The timing of this story is a a bit odd, but if Miranda really is afraid of Blake leaving, bringing a child into their relationship seems like a bad idea. I mean, who’s to say that Blake won’t end up leaving anyway, and then Miranda will be stuck with a child that she never really wanted.

However, the source also adds that Miranda is apparently looking at this baby as an opportunity to end Blake’s drinking and partying, once and for all. Apparently, after agreeing to have the baby, Miranda laid down a zero-tolerance rule for Blake’s constant carousing, and this way, she’s hopeful that they’ll finally be able to rebuild their relationship.

Do you guys buy that Miranda would be willing to have a child to save her marriage – especially by taking a break in her tour? Let us know your thoughts in the comments below.