The Bold and the Beautiful Spoilers: Aly Calls Out Taylor For Murdering Her Mother – Hunter Tylo’s Return 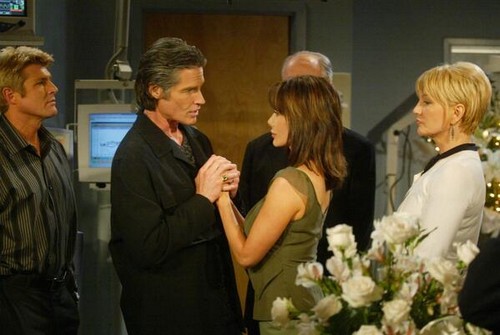 Characters are always coming and going on CBS’s popular daytime drama The Bold and the Beautiful, however B&B fans are especially looking forward to Hunter Tylo’s return April 25th. Tylo is well known over the years for her portrayal of the popular character Taylor on the soap opera.

April 25th won’t mark the first time that Hunter Tylo has reemerged on Bold and the Beautiful after being MIA for months, however it will be the first time that she has come face to face with Aly Forrester since she left Paris and returned to Forrester Creations. Taylor and Aly have a lot more in common besides the fact that she was in a relationship with Aly’s grandfather Eric Forrester. Taylor isn’t just Aly’s step-Grandma, she is also Aly’s mother Darla’s killer and her Dad Thorne’s ex.

Aly Forrester was off to a bumpy start when she began interning at Forrester Creations, she was lashing out at Wyatt, building a shrine for Hope in her bedroom, and talking to her dead mother Darla’s creepy ghost on a daily basis. However the teen’s new and very first love interest Oliver seems to have a very positive influence on Aly, and she has been making progress by leaps and bounds since he began showing interest in her.

Bold and the Beautiful spoilers have teased for weeks that when Aly lays eyes on Taylor for the first time in many years, “sparks will fly.” And, they should! Taylor left Aly motherless when she was just four years old, and then had the nerve to move in with her and Thorne afterwards and try to play step-mommy. The only person that may be able to help Aly keep it together when Taylor arrives is Oliver, and now there is some concerns that he doesn’t care about Aly and is just using her to secure his job at Forrester Creations.

What do you think B&B fans? Are you looking forward to Aly calling out Taylor after all of these years? Do you think Aly will be able to hold herself together long enough to put Taylor in her place, or will this emotional stress be just enough to push Aly over her psychotic breaking point? Share your thoughts and theories on Aly and Taylor’s face-off in the comment section below and don’t forget to check CDL tomorrow for more Bold and the Beautiful spoilers.