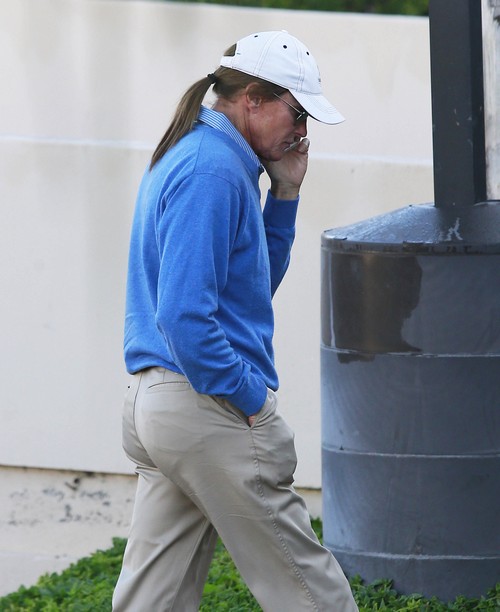 Kris Jenner will do anything for attention, publicity, or ratings – including pimping out her ex-husband, Bruce Jenner out to reality TV for his transgender sex change to become a woman. Bruce Jenner’s divorce to Kris Jenner was finalized last week, but that doesn’t mean that he’ll be able to escape Kris’ greedy paws just yet.

According to a new report from the National Enquirer, Kris Jenner has realized that using Bruce Jenner’s sex change for publicity would be a gold mine for ratings. The Enquirer’s source explains in further detail, “Kris has cooked up her most shameless scheme yet — a reality TV special about ex-hubby Bruce’s shocking feminization process. She’s offered him a $5 million payday to do an E! special. Kris desperately wants to capitalize on the intense interest in Bruce’s look. She’s buttering him up by saying she’ll make the special look sympathetic to him.”

Of course she will. The thing is – I don’t see Bruce Jenner EVER agreeing to this special, whether he’s offered $5 million dollars or $10 million dollars. He was offered boatloads of cash to stay with Kris Jenner, and he refused. He was offered a boatload of cash to keep making regular appearances on Keeping Up With The Kardashians, and he refused there as well. The poor guy spent more than two decades trapped in a suffocating marriage where his wife only used him for publicity – can you blame him for running away and never looking back?

Bruce Jenner is finally able to have the sex change he’s always wanted, and he knows that if he gives Kris one inch, she’ll take over his whole life and probably convince him not to have the sex change surgery in the end. And even though he wants to be a woman, Kris Jenner will convince him that that being a transgender is somehow not financially profitable, and then manipulate him into coming back into the Kardashian famewhoring fold.

What do you guys think? Could you ever see Bruce Jenner agreeing to a sex change TV special? Would he feel comfortable being a woman on TV, after all these years adjusting to another mindset? Transgender portrayals on TV are still few and far between.