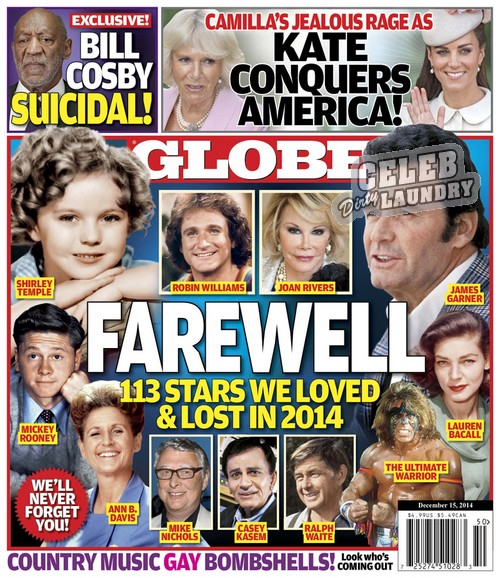 Camilla Parker-Bowles should be dancing around the palace celebrating, rather than running down Kate Middleton, considering she finally got her way and Queen Elizabeth confirmed she will be the next Queen of England and Prince Charles has called off their divorce for the sake of the monarchy. But, the miserable Camilla still isn’t happy – she may have won her war against Prince William’s wife Kate Middleton in England, but she is in a jealous rage because America supports and adores The Duchess of Cambridge and are anxiously awaiting her New York City visit.

The December 12 cover of GLOBE magazine warns, “Camilla’s Jealous Rage As Kate Conquers America.” Prince William and her pregnant wife Kate Middleton are set to arrive in New York City on Sunday December 7 – and the media is in an uproar over their trip, major news outlets have been bidding on interviews with the couple for weeks now. Apparently, all of the American press that the Duchess of Cambridge is receiving is not settling well with Camilla Parker-Bowles, because Americans could care less when she and Prince Charles travel to the United States.

This week’s cover of GLOBE Magazine also teases a piece on Bill Cosby – the comedian is smack dab at the center of a major rape scandal, and it is apparently becoming too much to handle. The December 12 edition of GLOBE reveals that the once beloved actor is now suicidal because of the allegations he is facing. And, as always our friends at GLOBE pay their respects to the late and great actors of our time. The newest edition of the weekly magazine features a touching farewell to the 113 stars we loved and lost in 2014, the familiar faces of Joan Rivers, Robin Williams, James Garner, Shirley Temple, Mickey Rooney and many more iconic celebrities grace the cover.

So, do you think that Camilla Parker-Bowles has reason to be concerned that Americans adore Kate Middleton and yet seem to despise her? Does it really matter, after all she is going to be the Queen of England, not the Queen of America? Let us know what you think in the comments below and don’t forget to pick up the December 12 edition of GLOBE Magazine as soon as it hits newsstands – we will be sure to grab a copy so we can dish all the latest details surrounding Camilla Parker-Bowles’s feud with Kate Middleton and more!