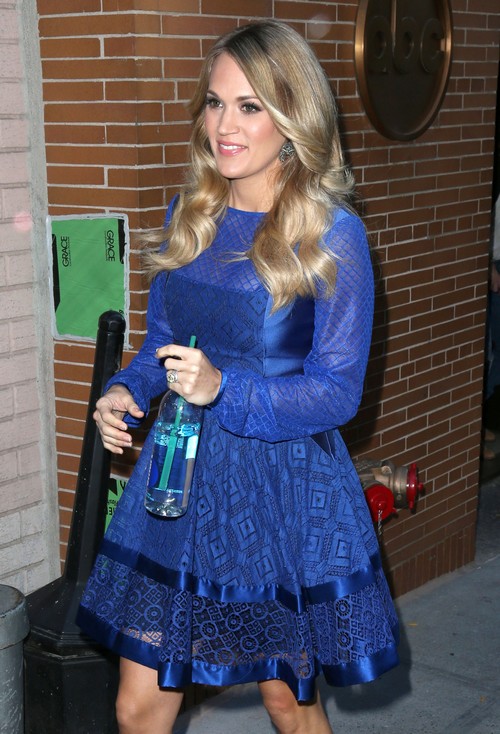 Carrie Underwood has been flaunting her baby bump all week, appearing on The View on Monday wearing a skintight blue dress. Carrie and her hubby Mike Fisher announced that they were expecting their first child on Labor Day, but rumor has it that Carrie and Mike are also dealing with some marriage trouble. Carrie has largely stayed quiet on the topic of her pregnancy and her marriage, but with this much speculation going around, I wouldn’t be shocked if she made a statement soon.

The reports we’re hearing claim that Carrie Underwood and Mike Fisher will break up and announce their divorce before the baby is born. We’ve seen plenty of Hollywood couples in the past use a pregnancy or baby to save their marriage, but it’s usually never lasted. Perhaps Carrie and Mike were hoping for the same outcome, but if they were, it seems they couldn’t even wait for the baby to be born before giving up on a reconciliation. Of course, this is all just hearsay, rumor, and speculation, so we won’t know anything concrete until Carrie and Mike say something – or do something.

Right now, Carrie is still in the very early stages of her pregnancy, and she’s barely showing any signs of a baby bump. She’s still putting the focus on her career, considering that she will co-host the CMA Awards on November 5th. If Mike Fisher doesn’t make an appearance at the festival to support his wife, I think we’ll have our answer.

Do you guys think that a Carrie Underwood divorce from Mike Fisher is coming? Let us know your thoughts in the comments below.

Carrie Underwood on an appearance on “The View” on October 27, 2014 in New York City, New York. FameFlynet