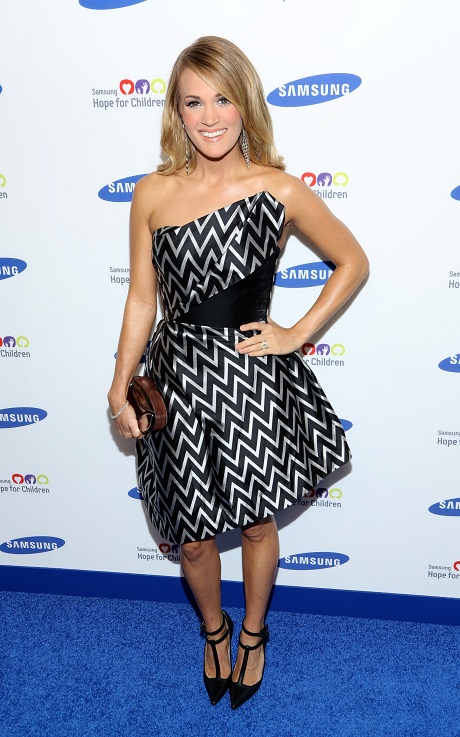 Despite the reported marital strife over the past couple of years, Carrie Underwood and husband of four years, NHL player Mike Fisher, announced that they are with child. Underwood, 31, shared the big news by posting a picture with her two dogs, Ace and Penny, wearing “big brother” and “big sister” shirts with the comments “In honor of “Labor” Day… Ace & Penny would like to make an announcement. Their parents couldn’t be happier!”

Fisher, 34, retweeted his country crooning wife’s tweet noting that he is hoping to name the child “Fly,” giving their daughter or son the name Fly Fisher. He shared, “We haven’t picked names yet but it’s looking like Fly is gonna fly. #boyorgirl #flyfisher.”

This will be the couple’s first child and they both seem gleefully happy about their upcoming bundle of joy. The couple has battled divorce rumors for quite some time. The six-time Grammy winner and her husband Fisher, a center for the Nashville Predators, say the child is due in the spring.

Carrie had wanted the chance to explore an acting career before having a baby despite her husband pressuring her to begin a family. There has been a great deal of tension for the past couple of years stemming from her soaring career and pushing off Mike’s dreams of starting a family.

It seems Carrie has relented and Mike has gotten his way. Maybe this will silence the divorce rumors now!