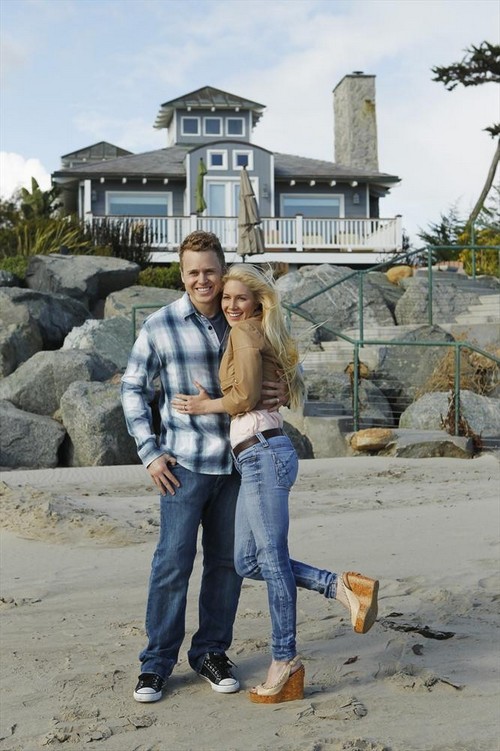 On the last episode of CWS, David Justice, a former Major League Baseball star who spent 14 years playing for both the Atlanta Braves and New York Yankees lives in San Diego, CA with his wife Rebecca, their three children: David Jr., D.J., Raquel and Rebecca’s parents; he traded lives with Dweezil Zappa who lives in Los Angeles, CA with his wife Megan and stepdaughter Mia.  Dweezil is the son of music legend Frank Zappa and began his music career as a VJ on MTV in the 1980’s. He currently tours as a professional musician with Zappa Plays Zappa. Dweezil and his family live a very “eco-friendly” lifestyle which includes walking rather than driving their car. Did you watch the last episode? If you missed it we have a full and detailed recap, right here for you.

On tonight’s episode, Amanda Beard is a four-time Olympic swimmer who has won seven medals for Team USA. Today she lives outside of Seattle, WA with her husband, Sacha, and their two children Blaze (4 1/2) and Dune (9 months.) The family lives in a small, secluded cottage where they enjoy time outdoors fishing, gardening and renovating their home. The family rarely goes out and prefers to spend their free time at home together as a family. Heidi and Spencer Pratt are best known for their roles on MTV’s hit reality series “The Hills.”  The couple lives on the beach in Santa Barbara, CA with their four dogs Castle, Rainbo, Dolly and Ninja. Heidi and Spencer love to go out and indulge in the finer things in life like champagne and expensive cars. Heidi spends her days shopping and lunching with her girlfriends while Spencer keeps up with the latest happenings in social media and spends hours caring for his extensive crystal collection.

We will be covering tonight’s Celebrity Wife Swap, Amanda Beard/Heidi & Spencer Pratt episode with all the details. You don’t want to miss this episode; you never know what craziness is going to break out! Don’t forget to come back to this spot at 8PM for our coverage of the episode.

Tonight’s episode of Celebrity Wife Swap kicks off with Spencer Pratt’s wife Heidi Pratt preparing to switch places with four time Olympic swimmer Amanda Beard. Heidi is going to be in for a rude awakening when she leaves Santa Barbara and her Hollywood lifestyle to go live in Seattle in a cabin in the woods with Amanda’s husband Sacha and her two young kids.

It’s the morning of the swap and Heidi and Amanda are packing their bags and heading to each other’s houses. Heidi arrives at Amanda and Sacha’s house, and the limo driver tells her she has to get out and walk because she can’t make it down the driveway in to the woods. When she arrives in the house she is ecstatic to see that she will be living with a baby for the week. Amanda is overwhelmed by the four dog cages in their bedroom, she remembers Spencer as a villain on TV and is sure she will have her hands full.

Sacha arrives at the house with the two kids and informs Heidi they need to get dinner ready and have the kids in bed by 7:30. At 8:00 Sacha informs her it is time to go to bed, and tells her she will be sleeping in the guest cabin out by river and warns her there are some bears in the area. Meanwhile, Spencer tells Amanda to get ready so they can “go out on the town.” Amanda is annoyed, and she feels like Spencer is living like a college student.

The next day Heidi wakes up at 5:00 AM with the kids, she is surprised when Sacha tells her that she doesn’t get to go back to bed. He makes her help him do some gardening, and then forces her to go fishing in the rain. Then later on guests arrive for a barbeque at the Beard house, Sacha is annoyed because Heidi isn’t helping her.

In California, Amanda is annoyed because Spencer slept half the day away and then got up and took a nap on the patio. Finally he gets up and decides to take Amanda to his favorite Mexican restaurant. She lectures him about taking better care of himself and drinking too much.

It’s time for the rule change, and Amanda and Heidi create their own rules for each other’s husbands. Heidi wants Sacha to shave his beard off, she wants him to start focusing on his photography career again, she also wants Sacha to go out for a night on the town. Amanda wants Spencer to eat healthier and start exercising, and get over himself, and focus on a career.

Heidi takes Sacha to get his beard shaved and the family buys all new matching outfits. Meanwhile Amanda wants Spencer to start preparing himself for parenthood, she gives him a fake crying baby to carry around with him. In Seattle Heidi stages a family photo shoot with Sacha and the kids.

Spencer is having a meltdown trying to take care of all four dogs and his fake crying baby which he named “Thing.” Sacha and Heidi take the kids out for ice cream and a ride on the ferris wheel overlooking Seattle. Amanda thinks Spencer is too cocky, so she takes him to the pool to see who can swim faster. She wins and forces Spencer to wear a pink shirt that says “I Got My Butt Kicked By A Girl.”

After a long week the swap is finally over, and Heidi and Amanda are packing up so they can go home to their husbands. Spencer, Heidi, Sacha, and Amanda all head to the round table to discuss what they have learned during the swap week. Sacha points out that Heidi didn’t really follow any of the rules he had for her, she ditched the garden work and fishing. Amanda reveals that she made Spencer take care of a fake crying baby.

Spencer reveals that after taking care of “Baby Thing” he has no intention of having kids for another ten years. Heidi starts crying because she wants to have kids, and Spencer doesn’t want to change his life. Amanda also reveals that she pressured Spencer to get serious about choosing a career path, and Heidi also tried to get Sacha back on track with his photography. Over all Heidi, Amanda, Spencer, and Sacha learned valuable lessons from each other’s families and plan to use them in their everyday lives.