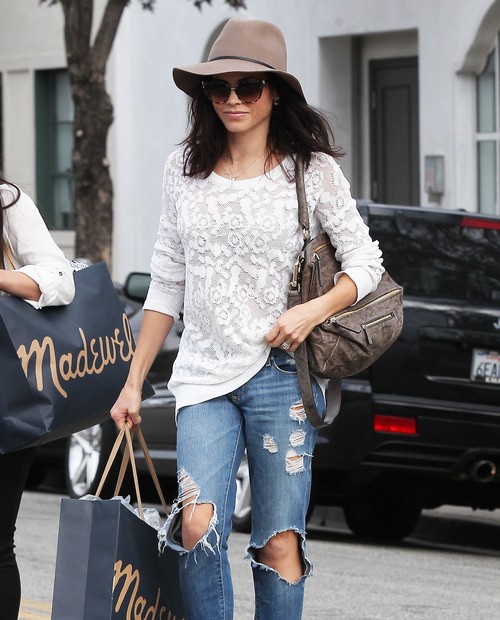 Channing Tatum and Jenna Dewan’s marriage has reportedly been on the rocks since rumors emerged of Channing cheating with Johnny Depp’s fiancé Amber Heard on the set of his new film Magic Mike XXL. But, rumor has it that Channing’s flirtatious reputation and wandering eye are just the tip of the divorce iceberg. Jenna is bitter that her hubby has sky-rocketed to super stardom over recent years, and the only attention she receives is from his cheating scandals.

Channing Tatum and Jenna Dewan met on the set of their 2006 film Step Up, and at the time they were both relatively new on the acting scene. However, Channing catapulted in to stardom after the flick – and Jenna’s career seems to be fizzling out and losing momentum. According to the December 29th edition of Star Magazine, “The brunette beauty was recently left disappointed when her show Witches of East End was abruptly cancelled by Lifetime after only two seasons. Channing has been in a slew of successful films over the past few years including 22 Jump Street, Magic Mike, and This Is The End.”

Star’s inside source revealed, “Jenna has a tough time finding work. Channing goes from one project to the next and she is very frustrated. She didn’t sign up to become a homemaker with no career, and things are very tense.” Second to cheating, success seems to be a leading cause in celebrity break-up and divorce. When two actors get together, and one blows up and the other becomes irrelevant – it is always a recipe for disaster.

Do you think Channing and Jenna are headed to a divorce? Or do you think they will be able to overcome the cheating scandals and Jenna’s failing career? Do you think Jenna is being petty and should be more supportive of her hubby? Let us know what you think in the comments below!