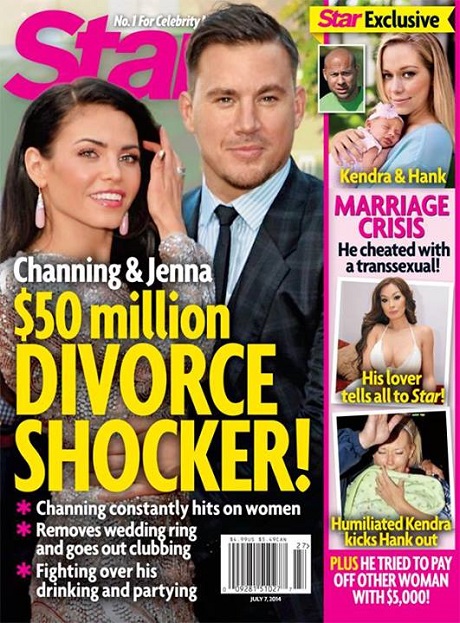 Ugh. I think that for the last couple of years Channing Tatum and Jenna Dewan-Tatum have been one of those Hollywood couples that we all really want to see make it. His career has totally taken off and Jenna’s doing pretty well for herself, too. And then there’s that adorable baby daughter that they have…she just seals the deal in making them look like the happiest little family ever. Unfortunately, it’s starting to seem like Jenna and Channing’s version of happily-ever-after may not be the kind that lasts.

According to the July 7th print edition of Star Magazine, his behavior is causing major problems in their marriage. Apparently, the actor likes to take his wedding ring off before heading out to the clubs without Jenna. He also hits on women and comes home a little too drunk. In an interview recently, Channing referred to himself as a high functioning drunk. It really raised eyebrows when he said it but it also gave us an idea of what Jenna may be dealing with at home. His bad behavior has caused so many fights lately that the word “divorce” is being mentioned.

Speaking of divorce, is there any way that Kendra Wilkinson is going to choose to stay with her husband, Hank Baskett? Cheating on your pregnant wife is really bad enough but getting caught with a transsexual model probably gutted Kendra even more. Of course the model, Ava Sabrina London, is now talking to everyone who wants a sound bite and Star Magazine does indeed have an exclusive.

Are you shocked to hear that Jenna and Channing are having some problems? Do you think that they will breakup soon? What do you think about Channing Tatum drunk all the time?