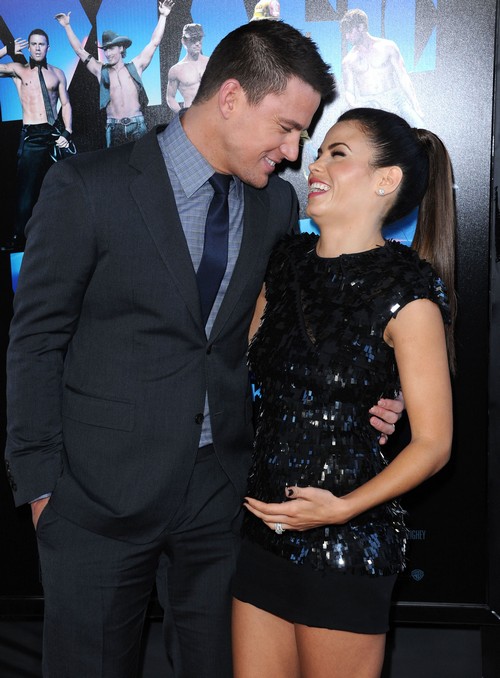 Earlier today, Channing Tatum and his wife, Jenna Dewan-Tatum, announced that they are expecting their first child together.  I think it’s safe to say that that will be one good lookin’ kid!  Channing was recently named by People magazine as The World’s Sexiest Man, and let’s be honest, Jenna isn’t sore on the ol’ eyes either.

The couple have been married for over 3 years, and this will be the first child for both.  Talk about an exciting year for the two; Channing starred in a slew of movies this year (I think five to be exact?) including the devilishly wonderful Magic Mike, 21 Jump Street, and The Vow with Rachel McAdams.

It’s nice to know that things are still going strong for the couple, who met on the set of the 2006 film ‘Step Up’, marrying in Malibu, California on July 11, 2009.  Jenna opened up earlier this year to Us Weekly about their plans to start a family.

“I would hope so!” the dancer-turned-actress told Us in January when asked if kids were in the couple’s future. “I just don’t know when. When it’s meant to be, it will happen.”

Well, ‘when’ is now – whether baby-to-come was in the cards or not!  I imagine Channing will be slowing down his career in order to be there for his wife and newborn child.  He recently told Entertainment Weekly that he wanted to step back from acting to focus on a few behind-the-scenes projects with his production partner, Reid Carolin (who also wrote the screenplay for Magic Mike).  Could the pregnancy be the reason for this? I’m going to assume it is, but hey – I certainly don’t claim to presume anything when it comes to celebrity couples.  All I can say is, I hope this union lasts.  So what do you think – will the uber gorgeous couple have a girl or a boy? I’m going with girl; you heard it from me first!