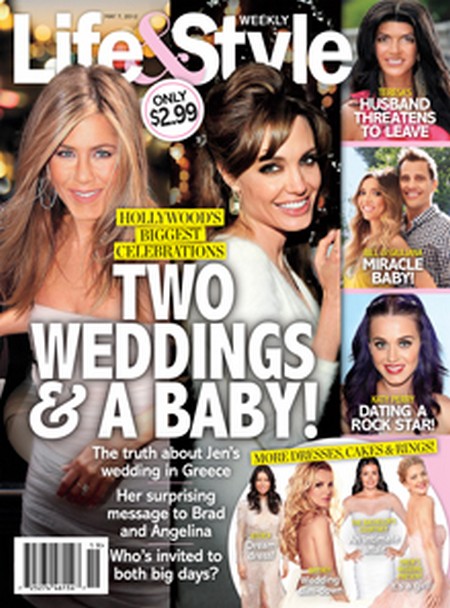 Jennifer Aniston has sent a message to Brad Pitt and Angelina Jolie following their engagement and its contents will surprise you.  In this week’s issue of Life & Style the cover story is Two Weddings & A Baby and promises to tell the truth about Jennifer’s rumored wedding in Greece.  Will Justin Theroux actually marry her, and if so, then when? Jennifer is supposedly happy about Brad’s engagement to Angelina but is that really true?  We hear that Jen is stewing and might pissed off!

We are promised that we will learn the composition of the guest lists for both Brangelina’s and Jennifer and Justin’s weddings.  Do you think that there will be much of an intersection between the two lists?  Life & Style says that many folks will be invited to both.  Will Jen be invited to Angelina’s wedding – we have heard she is desperate to be.

The issue also discusses Teresa and Joe Giudice and how they have have had their ups and downs.   Apparently their issues are at their worst on the new season of The Real Housewives of New Jersey. “In an upcoming episode, Joe threatens to leave Teresa,” an insider says.

The insider continues, “When she complains about fighting with her brother, Joe tells her, ‘I don’t want to hear about it anymore. When I say something, you f–king listen and shut up…. Try to get me around your family, just try it; I’ll end up leaving you.'”

We learn that in addition to being pregnant with a baby girl Drew Barrymore will be a happily married woman before summer.  Life & Style exclusively reveals that Drew and fiancé Will Kopelman have set the date for their upcoming nuptials and will wed on June 2.

There is news about Katy Perry dating a rock star and more.  This isn’t exactly news is it – since Katy was just spotted smooching with Robert Ackroyd of Florence + The Machine at Coachella.

Get your issue soon and you can read about all these fascinating stories.  What do you think Jennifer’s surprise message to Brangelina could be?