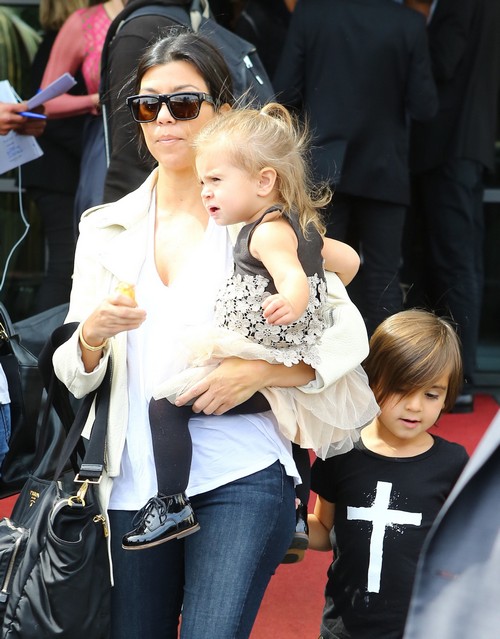 We were right as usual. CDL first told you weeks ago that Kourtney Kardashian was pregnant and was indeed expecting baby number 3 with Scott Disick and as of this morning the news has been confirmed. Apparently Kourtney didn’t want to announce her happy news until after Kim Kardashian’s over-the-top wedding to Kanye West had come and gone. Now, ten days after the nuptials US Weekly is confirming on the cover that Kourtney Kardashian pregnant and that this baby was very much planned.

She and Scott have two kids, Mason, age 4 and Penelope who is nearly two. Motherhood has become the most important thing to perhaps the most grounded Kardashian sister and it’s not too shocking to learn that she’s going to have another baby. Sources close to Kourtney say that she really wants a big family and that nothing makes her as happy as being hands-on with her family. That’s quite a contrast to how she was raised, surrounded by nannies rather than experiencing real parenting from momager Kris Jenner.

Scott lost both of his parents in the last several months and after grieving the double loss it seems that he also was looking for something to renew his family. After hitting the bottle hard at first Scott supposedly turned to Kourtney for real support and the whole experience brought them closer, making baby number three seem like a great idea. Are you guys surprised to hear the news or were you thinking the rumors about Kourtney being pregnant again might be true? Tell us your thoughts in the comments below!

Photo Credit: FameFlynet and US Weekly