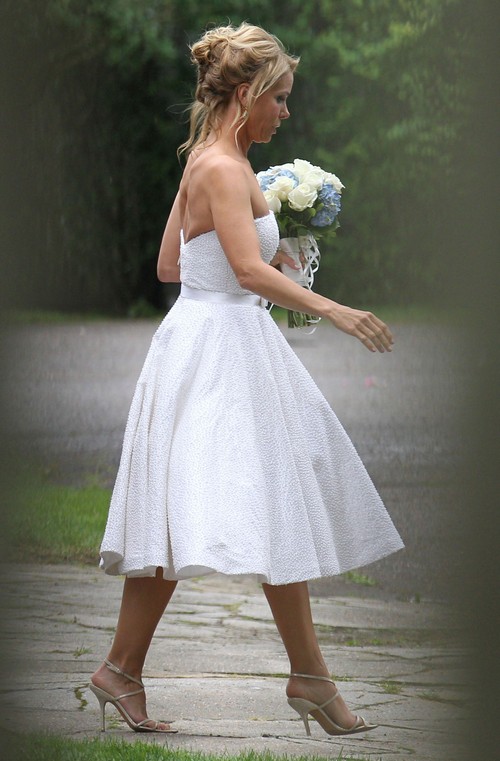 I guess now that Robert F. Kennedy and Cheryl Hines have finally swapped those vows neither of them is too worried about the details of their romance spilling out into the press. While Cheryl has especially taken great steps to try and preserve both her reputation and her relationship with Kennedy it has struck us all as odd that this otherwise smart woman would choose to settle for a dud like Kennedy. He just got caught cheating earlier this summer with a Connecticut socialite and it seemed insane that Cheryl Hines didn’t have the good sense to pull the plug and run. Now that some new info has come out things make a bit more sense.

According to the Aug. 25th print edition of The National Enquirer it was actually Robert F. Kennedy Jr. himself that threw up flares in a very interview with the New York Times. When asked about meeting his new wife he admitted that sparks flew between them back in 2010 and that at the time he was separated but that Cheryl was still married to Paul Young, a manager and producer. Cheryl’s costar on Curb Your Enthusiasm, Larry David first introduced the couple and the rest is history.

Sources say that Cheryl and Kennedy most certainly acted on those early sparks which makes her just as much a cheater as her new husband is! Learning that Cheryl cheated on her first husband kind of changes everything in that no one is really feeling sorry for her for being cheated on by Kennedy. Either a bit of karma may have been at play or else these two people may be very well suited for each other. Do you think that Cheryl and RFK Jr. are in actuality a perfect match? Maybe he deserves the kind of wife that he has to keep tabs on, don’t you think? Tell us your thoughts in the comments below!