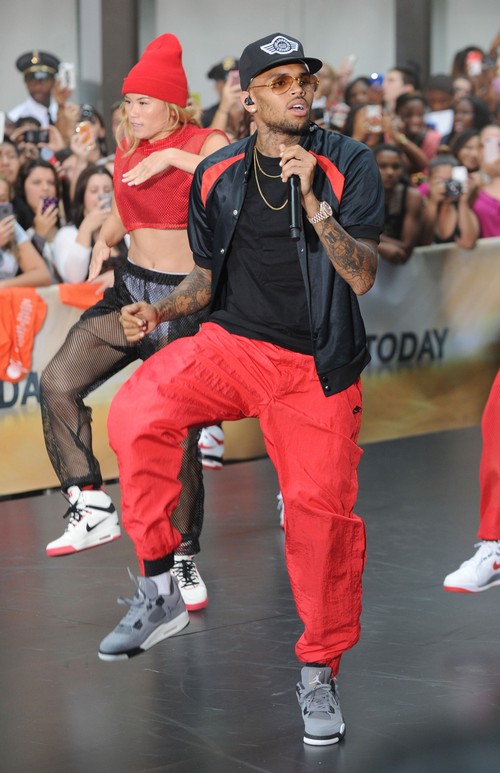 Chris Brown‘s bodyguard, Christopher Hollosy, is taking trying to take the fall for him, for reasons currently unknown to the general public. Well, no, it’s actually not that hard to deduce the reasons. Chris is probably paying him a lot of money to take the fall for him, and it makes complete sense. Chris gets sentenced for assault, even misdemeanor assault and he goes back to jail,l possibly for four years. His bodyguard gets sentenced? Well, he’ll probably face a fine and minimal jail time, but nothing compared to what Chris is looking at. Plus, Chris’ time is worth millions of times more than his bodyguard’s, right? Of course, there’s always the chance that both of them get sentenced for misdemeanors, which is also a very likely possibility.

We all remember this case, where a victim alleged that Chris Brown punched him in the face when he tried to approach him outside of his tour bus. However, Chris’ bodyguard took the blame for the incident, and according to TMZ, was found guilty of misdemeanor assault, this morning, April 21.

Chris’ trial happens later today, so this development is obviously crucial in the way things will go during that particular trial. It’s being held in D.C., and it’s obviously a big, BIG deal – not least because it will be one of the few times a celebrity is actually faced with the consequences of his actions.

Chris has obviously denied hitting the man, but if he’s found guilty of the misdemeanor assault, he’ll end up going back to jail. The judge in the Rihanna assault case can revoke Chris’ probation and send him back to jail for up to four years. However, now that Chris’ bodyguard has taken the fall for him, the chances of Chris getting sentenced for assault might have dropped. Albeit, not by a large margin, but they’ve still probably dropped. It’s called attempting to ‘buy justice’ in the criminal justice system – where the rich are most obviously not treated fairly nor equally.

We will keep you updated throughout the day as we get the latest news about Chris’ court case.