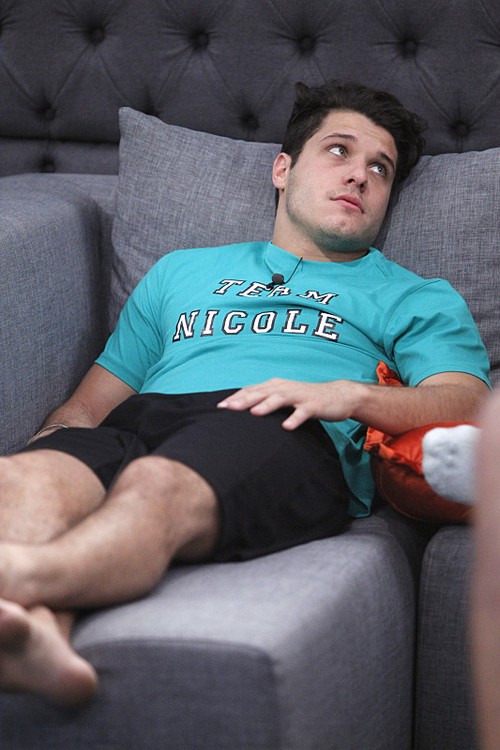 In the world of Big Brother 16, loyalty does not apply after the week of the final six. The contestants should be all about trying to win the right votes and get out the biggest threat to win the Big Brother 16 game. Surely by now Cody knows that not pulling the trigger can be a massive mistake. When Caleb was in the position of power, before Derrick won HOH and nominated him and Victoria for eviction, Cody was still sitting pretty. Now Cody has won POV as Big Brother 16 spoilers indicate. If Cody doesn’t start making plans now to oust Derrick, however, he has no chance of winning Big Brother. What’s worse is that Big Brother 16 spoilers offer no indication on the live feed that Cody is figuring this out!

It happens every single Big Brother season…people get to the end with an inflated sense of self. They think they have done more than they actually have and they do not give enough credit to the people sitting next to them. Right now, POV Cody (and all the guests) should be paying attention to one thing…who can I beat?

When you look at who Cody can beat, the list is rather small. Victoria is who he would like to have sitting beside him. Caleb is a possibility and Frankie no longer matters because he is evicted. Derrick is the one guy nobody has a chance against.

Why then, is Cody doggedly determined to go with Derrick to the end? Because they made a “cool” alliance? Because he feels a loyalty to Derrick? Come on!

Cody needs to start right away on formulating a plan to get rid of Derrick. He can’t truly get rid of Derrick without the help of someone else, so getting in Caleb’s or Victoria’s ear is essential. Of course even with help it won’t be easy since Derrick is HOH!

The problem with Caleb is that he has to be handled a certain way. You can’t come at Caleb with a “logical” plan. You have to go to Caleb with either a way of inflating his ego or abusing it. If you can find a way to make Caleb feel threatened by Derrick, he will doggedly go after him and do the dirty work for you – of course all this is probably moot at this point.

If that doesn’t work, simply do the ego stroking that is needed to get Caleb in your corner. The best way to do that is to tell him that he is such a Big Brother icon that you would be honored to sit next to him at the final. Explain that Derrick doesn’t fully appreciate him and that you want to be the one to sit next to him.

Cody should say that he knows nobody has a chance against Caleb and that at least he appreciates what Caleb has done in “Big Brother History” so far. Stroking Caleb’s ego like that will virtually ensure that Cody would go with him to the end. If he plays his cards right, he might even be able to take out Caleb and replace him with Victoria once Derrick is gone.