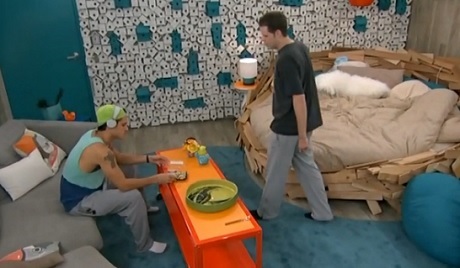 The CBS live feeds are officially back up, and that means the Big Brother 16 spoilers are rolling in for week 12. A special episode of Big Brother aired on Tuesday, September 16, and the houseguests were surprised with an early Week 12 eviction. Frankie Grande was blindsided when his old alliance turned on him and unanimously voted him out of the Big Brother 16 house. The Big Brother 16 final four: Derrick, Victoria, Caleb, and Cody headed to the back yard to compete in the next Head of Household Competition (as reigning HOH Caleb had to sit this competition out).

The current Head of Household winner is Derrick. The Big Brother live feeds just returned, and it looks like HOH Derrick has already held the nomination ceremony and placed Caleb and Victoria up on the block for eviction. Derrick and Cody have had a final two deal for weeks, and they have been scheming to take Victoria with them to the final three, so no one is exactly shocked by the news that Caleb and Victoria are sitting up on the block (except for maybe Caleb).

According to Big Brother spoilers from the live feeds, the final four have already competed in the second Week 12 Power of Veto competition, too. This POV competition is huge and could change the entire game. If Caleb wins and saves himself from the block, Derrick would have no choice but to put his final two partner Cody up for eviction, and Caleb could make a power move and vote Cody out. But, all of that really is irrelevant, because Big Brother spoilers from the live feeds reveal that Cody is the POV winner. Cody hasn’t held the POV ceremony yet, but it’s safe to assume that he won’t be using the POV to save Victoria and Caleb this week.

So, Big Brother fans, season 16 is winding down rapidly, and on Wednesday, September 17th another house guest will be evicted. Cody is the only player able to vote in this eviction, do you think he will vote to evict Victoria or Caleb? Share your predictions in the comments below and don’t forget to check CDL for all of your BB16 spoilers and recaps.

Update: as predicted Caleb was evicted – Click Here to read the detailed recap

Update: after Caleb was evicted from the Final 4, the first round of the HOH competition was held and live feeds showed us that Cody won round 1 of the Final 3 Head of Household Competition. Now Derrick and Victoria face off in Round 2 of the competition. The winner of round 2 faces Cody in round 3 to decide the Final HOH who automatically goes through to the Final 2 along with whoever he/she decides to take along. To read all the details of round 1 and the schedule of the rest of the show Click Here!