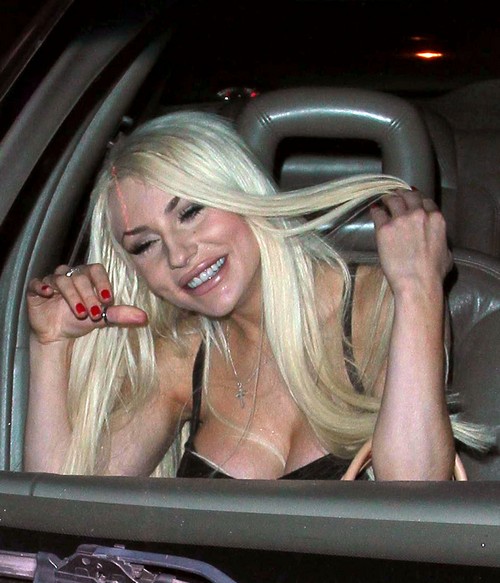 Generally speaking, whenever people get divorced, they end up moving away from each other and living apart. I don’t know why people seem so surprised that Courtney Stodden is living away from Doug Hutchison following their divorce, but yes, Courtney is no longer living under the same roof as Doug.

A source reportedly told Celebuzz [via Radar Online], “She moved into the studio apartment next door to the house she and Doug rented together. But Doug still lives in the main house. They’re not divorced yet, so she’ll stay there until they figure out how they want to proceed with things.”

In addition to moving on in her professional life, Courtney looks like she’s also starting to move forward with her personal life. She was reportedly spotted on a date with agent David Weintraub in West Hollywood the other day, and sources add, “Friends set them up on a blind date. It was their first date and it went pretty well. She likes him and he’s been smitten with her, which is why he wanted the set-up. But they were just getting to know each other.”

Weintraub is only 35 years old, which already makes him infinitely better than Doug Hutchison, at least when it comes to the creepy factor of their relationship. On the other hand, Weintraub is the lowlife who was caught fooling around with Polina Polonsky, Lamar Odom’s crack-whore. And whether or not Courtney succeeds in getting another reality show, she should be commended for finally cutting off that ball and chain that was Doug Hutchison.