Cressida Bonas Parties At Glastonbury: Officially ‘In’ With Hollywood and Out With Prince Harry and The Royals 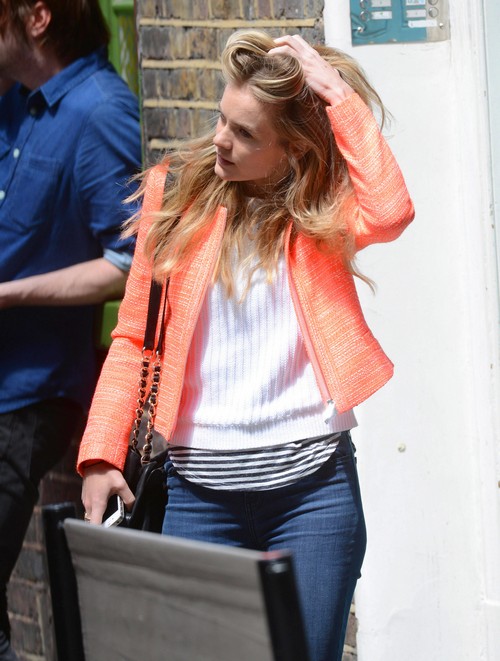 Cressida Bonas is doing her best to pretend as though she’s completely over Prince Harry. She’s doing this by moving full pelt into her movie star lifestyle, complete with wearing hipster-y outfits to music festivals and getting caught cozying up to actors.

Cressida was photographed at the Glastonbury festival, and in addition to posing-not-posing for the paparazzi, she was also flirting with 22-year-old English actor Will Poulter. A source tells the Daily Mail, “Loads of people wanted to get chatting to her, but she spent most of the night chatting to Will. They really hit it off. They’ve got lots of mutual friends from London and the conversation was clearly flowing freely. Cressida barely stopped grinning all evening.”

Uh-huh. I also have a feeling that Cressida ‘grinning’ the entire evening had a lot to with the amount of attention she was getting. After her breakup with Harry, we’re starting to get a whole new perspective on this woman, and inklings that she’s actually a closet famewhore. First of all, she clearly used Harry as a stepping stone to more fame and an acting career, and look how well that’s paid off. And now, she’s flirting it up with an actor at a music festival, fully KNOWING that she’s being photographed and followed. It’s a very fame-whorey thing to do, and something I would expect from a Kardashian, not a woman who used to date a royal.

Next thing you know, Cressida will start announcing her relationships via a People Magazine cover, and strategically staging photo-ops with her next boyfriend.

What do you guys think of Cressida’s Glastonbury photo-op and her flirtation with Will Poulter? Is she trying to make Harry jealous, increase her public profile, or both? Let us know your thoughts in the comments below.