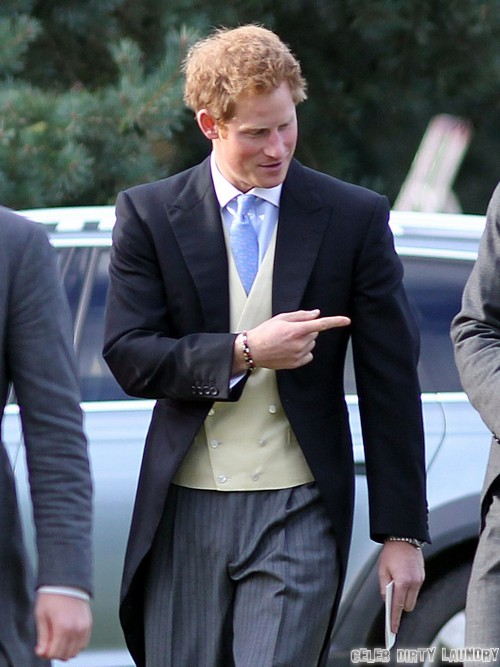 Prince Harry and Cressida Bonas may have been on the verge of getting engaged, but shouldn’t it take longer than a few days to recover from such a supposedly serious relationship? After all, it was reportedly Cressida who pulled the plug on their romance after refusing to give up her independence – a.k.a. she had no interest in joining the royal family – which makes Harry the jilted partner. But he’s certainly not acting like someone who just had his heart broken, especially considering that he’s already hitting the town, partying with dancers, and getting drunk on a regular basis.

We already know that he hooked up with some random blonde socialite at Guy Pelly‘s wedding in the US, but sources close to Harry also elaborated on his recent shenanigans, which include – you guessed it – partying.

Apparently, Harry was drinking at a club with a bunch of dancers, and one actually tweeted, “It’s not everyday you get to dance and have vodka shots with Prince Harry! He’s the most down to earth man considering he’s a prince.”

Of course the dancer claims that Harry’s down-to-earth. Who wouldn’t, when a prince was buying you shots and dancing with you? It is interesting that Harry doesn’t feel like hiding his partying anymore, even though there was a time where he was under a lot of pressure to appear more serious. Of course, that also came after his Vegas shenanigans, so he’s probably excused now that he’s proven that he can stay out of the spotlight for the wrong reasons.

The real question comes to who Prince Harry will end up with after Cressida Bonas. Despite rumors claiming that they’ll get back together, the more likely scenario is that Harry has several quick [and secret] rebounds before meeting his next ‘serious’ girlfriend. However, I would be very surprised to see him get engaged within the next few years, even with family pressure. The guy just has too much fun being a bachelor, and if he didn’t give that up for Cressida, I don’t see him giving it up for anyone else soon.