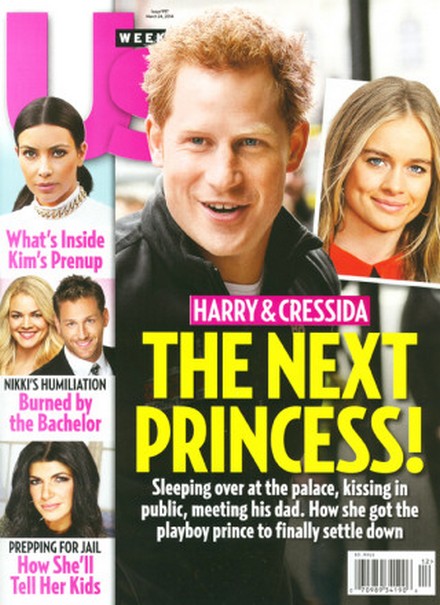 Prince Harry has finally found his princess! Well, if it was up to him, I’m sure he’d never get married – but as a member of the royal family, he doesn’t have that luxury. Luckily for him, he does seem to be head over heels in love with Cressida Bonas, and according to the latest cover issue of US Weekly, an official proposal is all but a done deal.

The report has all sorts of details on Harry’s relationship with Cressida, which includes their sleepovers at the palace, Cressida’s meeting with Prince Charles, and how Harry finally decided to settle down. US Weekly’s source says their relationship is very serious, that Harry calls Cressida ‘Cressy’, and that they’re planning to be officially engaged by the end of the year.

There are also details on Cressida’s private life, all of which make her sound humble and down-to-earth despite the fact that she had a very posh upbringing. Cressida and Harry apparently like to eat burgers and go bowling during their free time, and when they’re not together, they reportedly send each other tons of emojis. Awwww or planted by their PR?

Well, everyone saw this coming from a mile away. Whereas Chelsy Davy was never suitable for Harry, Cressida fits perfectly into the princess profile. She’s classy, she’s not falling out of clubs every other night, and she seems like a great match for Harry.

US’s cover also focuses on Kim Kardashian‘s prenup details, Nikki Ferrell’s humiliation by Juan Pablo on the Bachelor, and Teresa Giudice preparing her kids for the news that she’s going to prison.

What do you guys think of this week’s cover? Let us know your thoughts in the comments.