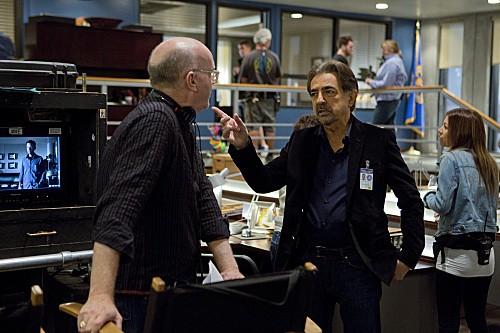 Tonight on CBS CRIMINAL MINDS continues with another new episode called, “The Road Home.”  On tonight’s season 9 episode 13 the secret JJ has been keeping from the team may be catching up with her.  Did you watch last week’s episode?  If you want to catch up before tonight’s new episode, we have a full and detailed recap, right here.

On last week’s show when the BAU goes to San Jose to investigate a string of murders, Garcia delves into her hacker past and reconnects with her old flame to help the team with the case.  Paolo Costanzo guests stars as Shane Wyeth, Garcia’s former love and fellow hacker.

On tonight’s show while the BAU looks for a vigilante killer on the loose in Cleveland, Rossi is concerned when his former Marine sergeant goes missing and heads to Los Angeles to find him. Also, the secret JJ has been keeping from the team may be catching up with her.  Series star Joe Mantegna directs his first episode of the series. Emmy Award-Nominated Actor Meshach Taylor returns as Rossi’s Former Marine Sergeant, Harrison Scott.

This episode of Criminal minds opens up to a nice chess game when unfortunately the two senior citizens were seen by local gang members. They tried to hold up the two elderly men when a good Samaritan stopped. If that’s even the correct term. The Samaritan shot two of the gang members and then followed the third for over a mile until he was able to kill the kid. Very soon the vigilante didn’t appear to need a reason to kill. There was a fourth victim found dead at a bus stop. It’s unknown why the last one was killed.

The BAU were able to identify the fourth victim as a mugger. He had both a record and someone else’s wallet on him. They traced the wallet back to an older woman. She told them that her bag was snatched and a man had come up to her asking who did it. She remembers the man was very calm as she pointed out the kid. A bit too calm. She tells the team their vigilante appeared to have dead eyes.

The vigilante struck again. This time he was driving by when he saw a man start physically abusing a woman. He came out of his car and walked right up to them. To be fair he did try to warn the abuser to let go of the woman. When he didn’t; the vigilante killed him. Later Blake and Reid were trying to speak to the woman and she refused to help. The man that died was her ex-husband. He’s been ignoring his restraining order and finding more and more ways to hurt her. The cops couldn’t stop and the vigilante could. She hopes the cop never finds her guardian angel.

Rossi can’t be with the team right now. An old friend of his from his army days needed his help. Harrison Scott is a recovering alcoholic and Rossi was worried he would do something stupid. When he did find him though, Rossi saw things weren’t that bad yet. He has a bottle but it hasn’t been opened.

The vigilante stocked up on bullets. He doesn’t feel he should stop killing criminals. Before he would be at the right place, right time when he killed someone. And yet now, the vigilante is actively searching out newer victims. He tracked down some low grade meth cookers and killed them. This is a sudden change in his MO and the only good news is that BAU knows who the vigilante is now. Clifford Walsh made sure he was caught on the security cameras. He didn’t care if the police learned his identity.

Walsh used to live in the area several years ago, but moved after his wife and son were killed in a home invasion. The man charged for deaths, Clark, only got ten years. Walsh was waiting on him to get out when the murderer was accidentally killed in prison. Based on evidence they found in his car, the BAU determined Walsh returned to town to kill himself and only stopped when he saw the gangbangers in the park.

Walsh went from suicidal to homicidal in no time. And he’s probably getting worse. Walsh just killed a man that had no illegal ties. Morgan thinks he’s devolving.

Rossi wants to help Harrison. The only way he can convince his friends to return to alcoholics program is if he helps Harrison with his estranged son. However Harrison’s son wants nothing to do with his dad. He grew up with his father always promising to get clean and never doing it. He doesn’t hate his father, but he has to look out for his own family. He can’t have them getting attached to Harrison only to let down.

Harrison returns to the program. And when he does, he saw his son’s family there to offer him support. The son must have changed his mind. It seems he wanted to give his father one more chance.

The BAU thought the home invasion was a two man job. Yet after they looked at Walsh’s possessions again they notice how he doesn’t have anything of his son’s. Only his wife’s. They were looking into that when they made a connection between the murderer and Walsh’s son. Both kids went on the same hiking trip and it looks like Walsh’s son was Clark’s partner.

His son knew when he would be out of town and also where his mother’s jewels were. What the kid hadn’t counted on was that Clark would show up high on meth and attempt to rape his mother. That’s how Walsh ended up losing both his wife and son.

Now that Clark is dead though how is Walsh going to get his revenge? He chose to hunt down Clark’s mother. The team found him before he can kill the innocent woman. Because that is what she is no matter what Walsh thinks. Walsh will only kill the guilty and sadly he broke his own code. They told him about the last man he killed.

That man was innocent as well. Walsh was trying to kill that man’s brother and didn’t know he moved. After hearing about his mistake, Walsh couldn’t take it. He killed himself right in front of everyone.

All throughout the investigation, JJ was doing her best to keep her new relationship under wraps. Reid suspected something was there but he didn’t know how her night would end. JJ was making another one of her secret calls when someone snatched her off the street.