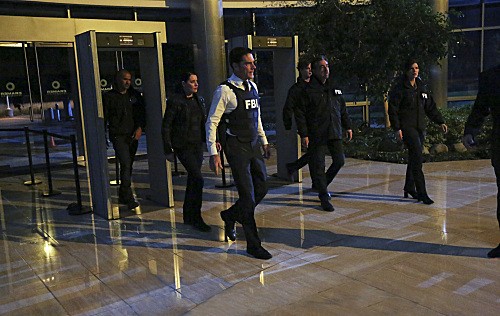 Tonight on CBS CRIMINAL MINDS continues with another new episode called, “T200.”  On tonight’s season 9 episode 14 To help with their search for JJ, the team calls upon Prentiss to help in the crisis.  Did you watch last week’s episode?  If you want to catch up before tonight’s new episode, we have a full and detailed recap, right here.

On last week’s show while the BAU looked for a vigilante killer on the loose in Cleveland, Rossi was concerned when his former Marine sergeant went missing and headed to Los Angeles to find him. Also, the secret JJ had been keeping from the team might be catching up with her.  Series stars Joe Mantegna directed his first episode of the series. Emmy Award-Nominated Actor Meshach Taylor returned as Rossi’s Former Marine Sergeant, Harrison Scott.

On tonight’s episode when JJ is kidnapped, the BAU delves into her time at the State Department to find clues to her disappearance and uncover a secret mission that now puts her life in danger. To help with their search for JJ, the team calls upon Prentiss to help in the crisis, on the 200th episode. Paget Brewster returns as Emily Prentiss. Also returning are Jayne Atkinson as Erin Strauss, Esai Morales as Section Chief Mateo Cruz, Josh Stewart as JJ’s husband, Det. William LaMontagne, Jr., and Nicholas Brendon as Kevin Lynch. Debrah Farentino guest stars as Undersecretary Rosemary Jackson.

Tonight’s episode picks up with JJ’s abduction. The federal agent was kidnapped right off of the street just when she was supposed to meet Cruz. It was the agreed time and location but he never showed. Instead JJ was nabbed, bagged, and eventually drugged.  And the person who took personal enjoyment in drugging happens to be an old acquaintance of both her and Cruz from way back in 2010 – his name is Askari!

In 2010, JJ was sent on a secretive mission from the States’ Department to the Middle East. She was a part of a task force looking for Osama Bin Laden. That’s where she first met Cruz. She was sent there to be the intermediary for female suspects. Her job was to crack them without the normal brutality saved for their male counterparts.

Back at the BAU though, word has spread she’s gone missing. William hasn’t heard from her and he’s getting desperate. But JJ told him if anything seemed off or wrong that he was to go to Cruz. However neither he nor the team can find Cruz because Cruz has also gone missing. Garcia says she couldn’t find either of them. Almost like they were wiped off the face of the earth.

The BAU are scared for their friend and even their new co-worker. They know the situation is too “sensitive” for them  to handle but who else will go looking for them. This would mean the State’s Department would rather sacrifice their own agents than waste time looking for them. They have better things to do such as shred documents here and move informants to safer locations there. While at the same time, seeing as both Cruz and JJ knew a lot more than they should have then their lives won’t be given any old minor task force. No matter how willing the BAU are.

Whoever has both agents is good. Askari once helped Cruz and JJ in the Middle East. He was also involved in the interrogation unit. That is until Cruz eventually found proof he was a traitor. Askari was using all the data he managed to obtain on their task force as a commodity to sell to whoever wished to hire him. A man for hire means no allegiance to anyone but the almighty dollar. Once his true agenda was revealed back in 2011; he immediately went underground to never be seen again.

Not that his “work” didn’t pop up on a couple of radars over time. Askari is a torturer and a sadist. There are no mistaking his kills with anyone else’s. His main job on the other hand was to break informants. Killing them is what he did for pleasure. The first record they have of his “signature” was JJ’s informant overseas and he’s been killing ever since. The BAU classified him as a serial killer with a pattern. Askari will do everything in his power to break his victim within the first 24 hours. If they somehow hold off and continue to fight him then he’s forced to move away from his usual pattern and turns to rape.

JJ’s friends have to find her in time and they were willing to go behind officials’ back to do so. They called in Emily. If there was any chance of finding her then they knew they were going to need back up. And from what they learned so far was that Askari would never gotten such high clearance way back when unless there was another person on the inside to go to bat for him. The team thinks that person is Cruz. Which makes JJ is an even more dangerous position.

But there was someone else involved in 2011. The interrogator that JJ was to essentially replace was listed as missing in action when as it turns out; Hastings stage his own kidnapping to escape persecution. JJ wanted to investigate who killed her informant and Hastings made sure to throw his lackey under the bus.

He escaped by setting off a road side bomb. Hastings knew JJ was pregnant and simply didn’t care. As long as he was able to escape then that was all that mattered.

When Askari was “questioning” JJ and Cruz, he told Cruz if he didn’t cave then JJ was going to lose more than a baby this time. And that’s when she figured who was pulling the real strings. JJ told Askari she was done with him and demanded his boss show his face. Hastings, perfectly healthy, came out of hiding on request.

He didn’t necessarily want to introduce himself but he wanted to take part in JJ’s torture. It seems it wasn’t Askari that moved on to rape. Instead it was a second unsub taking over from the first and Hastings always had a thing for JJ. He never forgave her for nearly outsmarting so many years ago and he was too cocky to realize she had done it again.

They need codes to a high some pretty high security data and actually though threats would get her to reveal hers. She gave a false one that alerted the BAU to her location. Luckily, the team arrived moments after Cruz revealed his own passcodes. Apparently the guy had a thing for JJ and couldn’t watch anyone hurt her.

The BAU were able to save his life and as for JJ; she made sure to get her vengeance. She went after Hastings. Catching him was worth the bruises but finally being able to be honest with her friends and family afterward made all she had to live thorough mean something.