Dancing with the Stars’ Derek Hough and Mark Ballas Sell Home Rather Than Come Out as Gay Couple? (PHOTOS) 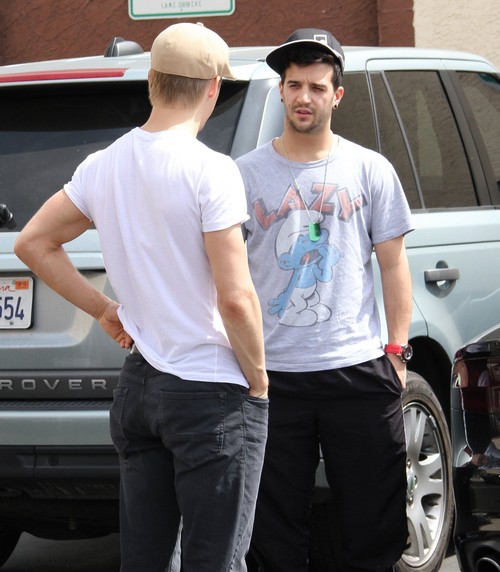 Dancing with the Stars’ professional dancers Derek Hough, 28, and best friend Mark Ballas, 27, have dodged rumors for years that targeted them as a romantic gay couple. So when the two bought a home together in the Hollywood Hills in February, those rumors spread like wildfire, leaving many to believe the two were taking the next natural step in their relationship. While the two have consistently had short-term relationships with women and have both denied being gay, it’s still difficult to completely dismiss the possibility that these two share more than a dance floor.

Those who know the two professional dancers best, in fact, have reportedly made comments to both Ballas and Hough that imply a relationship between the two. Both Maksim and Val Chmerkovskiy reportedly would tease Ballas and Hough, with Maksim (while still on the show) commenting that the two should “get a room” when he’d spot them together on set, tattled the Enquirer.

The two pro dancers have had a decent string of women in their past, though many were either on the show at some point, or somehow tied to it. Both have seriously dated former dance partners who they were paired with from the show, but none of their relationships have panned out so far… the list of broken relationships just keeps getting longer.

The, in July 2012, The National Enquirer reported that Hough was caught in a well-known gay club in Salt Lake City wearing shiny silver pants and shaking his backside for all to see. The tabloid spoke to a source who had asked Hough for a picture after spotting him getting his groove on. The source dishes that the dancer, “got all nervous and fidgety and stam¬mered, ‘No, no, no – not here!’” Derek and Mark denied these accusations.

Hough and Ballas grew up together, dancing under the coaching of Ballas’ father, pro dancer Corky Ballas. Joined by Derek’s sister Julianne, the three danced together, practiced together, competed together, and started a 90’s band, 2B1G, which stands for two boys and one girl. Mark Ballas and Derek Hough went to start another band in 2009 that did not include Julianne, named Almost Amy. They later signed a record deal and changed their name to the Ballas Hough Band. Besides making music and dancing together, the two decided in February to buy a home together.

Not long after the two began renovations, giving the home a more modern look. Could the pressures of persistent gay rumors and jabs from their DWTS cast have caused the two to scrap their initial plans for a cozy home for two and force them to flip the home in hopes of a decent profit?

The two paid around $1.25 for the spacious home. The home was nice and certainly didn’t need a flip, the two just worked together to give it a more modern look. They spent $200,000 on modernizing the mansion, leaving them with about $420,000 dollars after the sale. That gives each dancer $210 thousand before the chunk of taxes they’ll pay. Given what they make on DWTS, their endorsements, appearances, etc., they hardly need a side career of flipping houses. Making their new venture even more suspicious is the fact that neither had any prior experience with real estate or flipping houses. In fact, in a recent interview, Ballas shared, “We’re putting our own blood, sweat and money on the line,” also revealing that while he is not much of a DIY kind of guy, he and best friend Hough “have good creative vision within several areas of the rebuild.”

The two inexperienced flippers got the attention of HGTV and will get a reality show together documenting how the two will now work to flip homes. If the two truly are more than friends, as many have suspected for years, hopefully they’ll feel comfortable enough to come out and be honest with fans. Sadly, though, Hollywood makes it difficult for any man who is seen as a “ladies man” for the benefit of female viewers of the show to be anything but a ladies man on the show and in their life outside of the show. The two may very well be required to support the persona presented on the show. This is their way of being together as much as possible, without truly “coming out.”

For now, Hough is promoting his new book and makes it clear that he is passionate about his participation in anti-bullying campaigns as he was a victim of bullying as a child. ABC News reported that Hough was just honored at an event in California. The young talent received the “Inspirational Award” for bringing bullying into the spotlight. He was awarded the honor by the Gay, Lesbian & Straight Education Network at the organization’s Respect Awards.

When will Derek Hough and Mark Ballas feel comfortable coming out? How long will they endure the pain from pretending to be “ladies men” so they can fit the expected DWTS mold and women can fawn all over them during the show? Given what you know now, do you think there is a chance these two are straight? Ballas has confirmed there is a gay pro-dancer on the show…who do you think it could be? Tell us your thoughts below!