Days Of Our Lives Spoilers: Is Anne Judson-Yager Replacing Alison Sweeney – Will Sami be Recast? 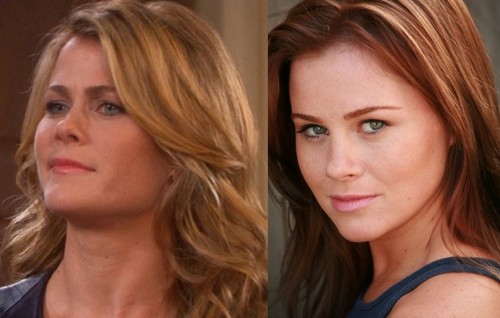 Days of Our Lives spoilers were released months ago teasing that Alison Sweeney was leaving the NBC soap opera. Time is winding down and Sami Brady’s final air date is growing closer and closer. The actress revealed on May 23rd on social media that she had completed filming her final scenes, which means that her last air date will be around the middle of October.

The strange thing is, the character Sami Brady doesn’t seem anywhere near ready to leave Salem. Generally when a major character is about to be killed off or leaving town for good, there starts to be signs leading up to their departure. For example, if John Black leaves DOOL, no one will by shocked because he is in a coma. When Camila Banus was leaving Days of Our Lives you could tell weeks ahead before she said her goodbye, because she confessed to murder.

So, who has NBC decided to cast as Sami Brady? Well, rumors have been making their way around the internet via social media and message boards for months now, that actress Anne Judson-Yager is the next Sami Brady. And, as you can see their resemblance is uncanny. If the rumors are true and NBC is on the search for a new Sami Brady, then Anne Judson-Yager might be able to slip in to the role without any of us noticing!

What do you think DOOL fans? Do you think that we will be saying good-bye to Sami Brady all together, or do you think that TPTB are going to recast the part? Let us know in the comments below and don’t forget to check CDL tomorrow for more Days of Our Lives spoilers.

Here is what fans at Soap Opera Spy Facebook have to say:

I would say send Sami to Colorado to visit Grandma and Grandpa for at least a year then recast if Alison doesn’t come back. The character Sami needs a break. Bring back Belle and Shawn Douglas.

Definitely kill her off. Nobody can replace her. It wouldn’t feel right!

Not sure I’m liking a recast. I just can’t see anyone else playing Sami Brady but Allison Sweeney.

Great idea to replace her with a look alike. The same with EJ.

Put her in a coma… so Ali can come back one day!

If they cast this close in appearance actress I would be interested in seeing how she grows into the part of Sami… You would be surprised how well some characters fit in and it is often better than loseing the presence of the character.

According to Alison Sweeney they left where she can come back from time to time. I think most of the fans would have a fit, if they recast her character. Please, say it isn’t so!!!

Yes, Allison is moving to work at GH but supposedly not to act – will she return to DOOL, only time will tell.