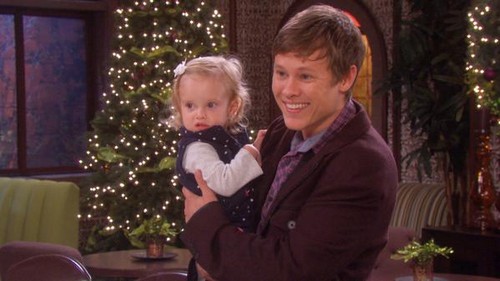 Days of Our Lives spoilers for December 15-19 tease another week of soap drama and some all new exciting episodes of the NBC soap. When Melissa Archer’s character Serena Mason arrived in Salem and comings and goings news revealed she was Eric’s ex, we all knew it was only a matter of time before Nicole got involved. According to Days of Our Lives spoilers for the week of December 15 – Serena asks Eric out on a date. When Nicole spots her ex and his ex out and about, it does not go over well, and she decides to launch an investigation into Serena Mason’s history.

Days of Our Lives spoilers for December 15-19 also tease some more information in to Aiden’s shady history will be revealed. According to DOOL spoilers, Hope is becoming more and more suspicious of her new man – and the fact that Bree is hanging around is only making her concerns worse. Days of Our Lives spoilers tease that when Aiden gets backed up in to a corner – some of his true colors will finally show.

Days of Our Lives spoilers have been teasing some problems for Will and Sonny for quite a while now, and his homecoming doesn’t exactly go as planned – Sonny is suspicious of his sudden return to Salem and thinks his hubby may be hiding something. And, in other Days of Our Lives news, Brady comes to Melanie’s rescue and saves her from Salem’s mean girls Theresa and Anne. DOOL fans can also expect the rivalry between Victor and Clyde to really heat up during the week of December 15.

So, Days fans, what do you think Will is hiding from his hubby, Sonny? Do you think Melanie and Brady are going to wind up together? Is Nicole going to find anything shady in Serena’s past? Did Aiden murder his ex wife? Let us know what you think in the comments below and don’t forget to check CDL tomorrow for more Days of Our Lives spoilers and news.