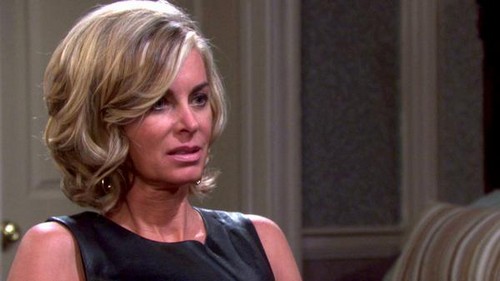 Days of Our Lives fans have been waiting weeks for the highly anticipated return of Eileen Davidson as Kristen DiMera, and it is finally here! According to Days of Our Lives spoilers for the week of July 28 – August 1, Kristen returns to Salem and all hell breaks loose. Her first order of business? Kidnapping Dr. Dan!

DOOL spoilers for the week of July 28th also tease that Sami Brady is still on the war path. Apparently outing EJ and Abigail’s affair to Jennifer and Ben didn’t give Sami as much satisfaction as she hoped. So she cooks up another revenge scheme to make Abigail’s life a living hell. According to Days of Our Lives spoilers, Sami forces Kayla to fire Abigail from the hospital, since she is an employee and had an affair with one of the board members. Kayla isn’t thrilled about letting Abigail go, but she has no choice when Sami threatens to take back the multi-million dollar donation from DiMera Enterprises.

And, Sami’s revenge schemes don’t stop with Abigail’s job. Apparently she wants everyone in Salem to be as miserable as she is. Days of Our Lives spoilers tease that Sami takes it upon herself to clue Jordan in on Rafe’s tryst with Kate. And, that’s not the only bump in the road for Kate and Jordan. According to DOOL spoilers on July 31st Rafe will catch Jordan with Clyde, and his girlfriend will have some explaining to do.

Also during the week of July 28th, DOOL fans can expect to learn the fate of Brady Black. And, whether or not he will be charged with attempted murder while his father John Black lays in a hospital bed comatose. How far will Theresa Donovan really take her scheme, would she let her innocent husband go to prison for a crime she committed?

So Days fans, why do you think Kristen DiMera kidnaps Daniel? Do you think that Sami has taken her revenge schemes far enough? Or do you support her mission to take down EJ and Abigail? Let us know what you think in the comments below and don’t forget to check CDL tomorrow for more Days of Our Lives spoilers.