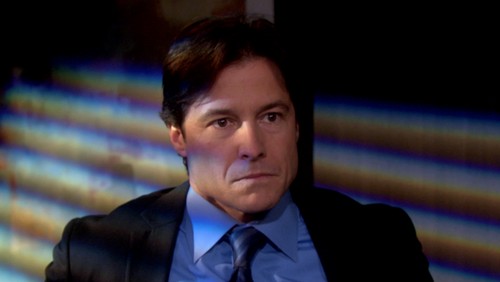 There has always been a couple of unhinged characters on NBC’s popular daytime drama Days Of Our Lives. According to DOOL spoilers, next week April 21st-25th Liam may just take the cake as the craziest Salem resident yet. Don’t count Nick out yet though, he’s still very much in the race for the crazy title, and he will pull out a few tricks of his own.

Liam has an unhealthy obsession with Jennifer and has made it his mission to break up her and Daniel. Last week Liam drugged Daniel, which resulted in his suspension from the hospital. This week on DOOL Daniel will have to go before the hospital’s disciplinary committee and learn his fate, and whether or not he will still be allowed to practice medicine. While he is meeting with the committee, Jennifer will find some incriminating evidence in Daniel’s apartment (which Liam planted), and she will begin to question whether Daniel is being completely honest with her. Jennifer heads to the secluded Horton Cabin later in the week, and is followed there by her stalker Liam. Nicole begins to put two and two together and realize that Liam isn’t all there, but she may be too late to save Jennifer.

Nick and Sami are in a full-fledged war since Sami tried to drive a wedge between him and Gabi. This week on Days of Our Lives Nick is up to his old tricks, and gets inside of Gabi’s head and convinces her that Sami is trying to steal her Granddaughter Arianna from her. Sami has bigger problems though, like the pictures that were delivered to her house of her fiance EJ cheating on her with Abigail. The big question is will Sami get to open the envelope and see the pics of EJ and Abigail cheating before someone intervenes. And, if Sami views the incriminating cheating pics, will her wedding to EJ be cancelled? Do you want Sami to see the photos?

Also next week on Days of Our Lives JJ and Paige have a disagreement and he winds up turning to another girl for comfort. And, an unlikely alliance between Daniel and Theresa forms when he turns to her for help.

What do you think it is that Jennifer finds in Daniel’s apartment courtesy of Liam? Could it be more drugs? Does Theresa actually have a shred of a conscious and decide to fill Daniel in on Liam’s scheme to break up him and Jennifer? How far will Liam actually take his obsession with Jennifer, do you think he may attack her when he gets her all alone in the cabin next week? Let us know what you think in the comment section below, and don’t forget to check CDL later this week for more Days of Our Lives spoilers.