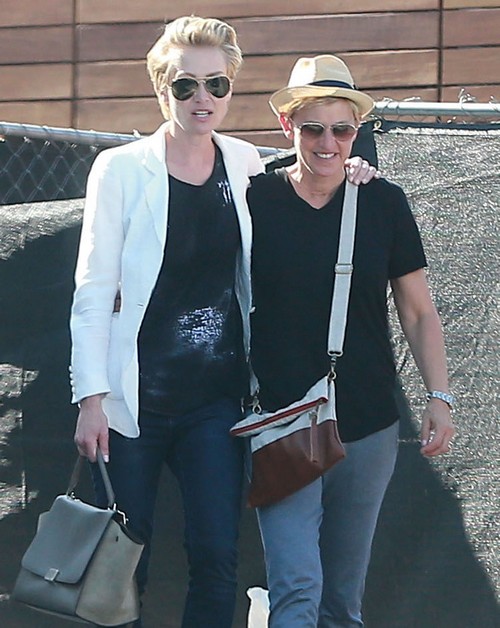 Ellen DeGeneres and Portia de Rossi are clearly trying anything and everything to salvage their marriage and avoid divorce including having a baby. Even though Ellen’s stated in the past that she’s not interested in kids, she’s reportedly reconsidered her stance because Portia wants them so much. Plus, the couple’s marriage is in such dire straits that a baby might be the only thing left to save it.

Now, I know a lot of people scoff at the idea of babies ‘saving’ a marriage, especially in Hollywood where nannies and housekeepers are usually the ones raising the kid. However, there are several couples who have stayed together solely because of their kids [prime example: Ben Affleck and Jennifer Garner], and it’s not out of the question that Ellen and Portia would be following the same strategy. In any case as the pap shots below indicate the couple is doing everything they can to quell the divorce rumors.

Plus, a report from In Touch Weekly claims that Portia put together a moving presentation for Ellen, consisting of a montage of video clips of Ellen interviewing kids over the years. And even though Ellen’s never wanted children, the montage has swayed her decision. Ellen realizes that Portia is desperate, and if she wants to salvage her marriage, she really doesn’t have much of a choice.

Besides, Ellen will try everything to prevent Portia from going back to rehab. Cutting out booze, having kids, whatever it takes, she’s going to do. The duo might have had their share of difficult times, especially lately, but nobody can say that they’re not trying to save their relationship.

What do you guys think? Will Ellen and Portia actually end up having children? Let us know your thoughts in the comments below.

Despite rumors of a divorce, couple Ellen DeGeneres and Portia De Rossi spend the afternoon shopping at Maxfield in West Hollywood, California on July 28, 2014. Afterwards the pair went to Peninsula Hotel for some alone time. Ellen broke the upcoming news of Portia joining the show ‘Scandal’ by tweeting, ‘So annoying when people brag on twitter & that’s why I’m not tweeting that Portia just signed on to do a top secret arc on ‘Scandal’. Oops.’