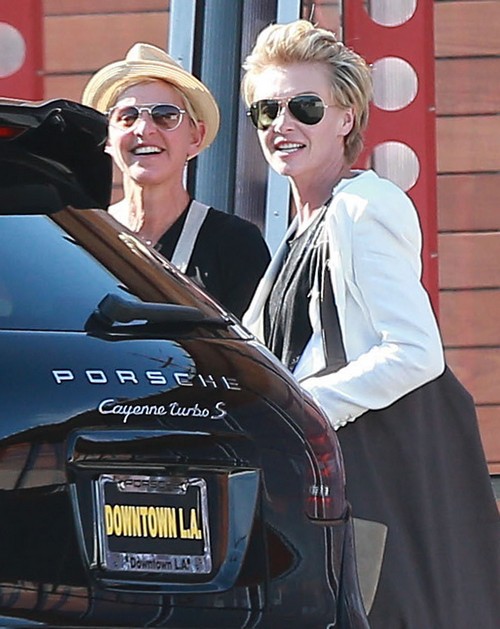 Ellen DeGeneres divorce rumors are popping up once more and this time an alleged drinking problem is to blame. Portia de Rossi reportedly went to rehab for drinking earlier this year, but alcohol addiction apparently runs in the [married] family. According to a new report from The National Enquirer, Ellen DeGeneres is being urged to seek help for a drinking problem. What is it with this couple and alcohol? Actually, let me rephrase: what is it with Hollywood and alcohol?

Sources tell the Enquirer that both Portia and Ellen’s mother, Betty, and brother Vance have told Ellen to seek help, but she’s afraid of ruining her clean-cut image with rumors of alcohol dependence. However, the source also added, “With the holidays coming, everyone’s worried that Ellen’s drinking could get out of control.”

Honestly, this wouldn’t be the biggest shocker in the world if it turned out to be true. There have been many celebrities in Hollywood that seemed like the perfect goody two-shoes, and it was later revealed that they were meth addicts or had drug busts in their past. Obviously, Ellen’s case is nowhere that severe since alcohol addiction is much more common, but if her wife dealt with it, who’s to say that Ellen also didn’t deal with it? From all the rumors and stories posited about their marriage, it does seem like they were having major relationship problems earlier this year. Maybe they solved those problems, maybe they didn’t – but clearly it’s made an impact on both of their lives, especially in regards to their health.

What do you guys think? Do you believe that Ellen DeGeneres is actually suffering from a drinking problem? And if she did, do you think she’d actually agree to go to rehab – especially a mere few months after Portia de Rossi went to rehab? The intense media speculation around their marriage is clearly not doing them any good, and this might only increase the divorce rumors and speculation. Of course there is absolutely no evidence presented by The Enquirer that Ellen has a drinking problem. Let us know your thoughts in the comments below.