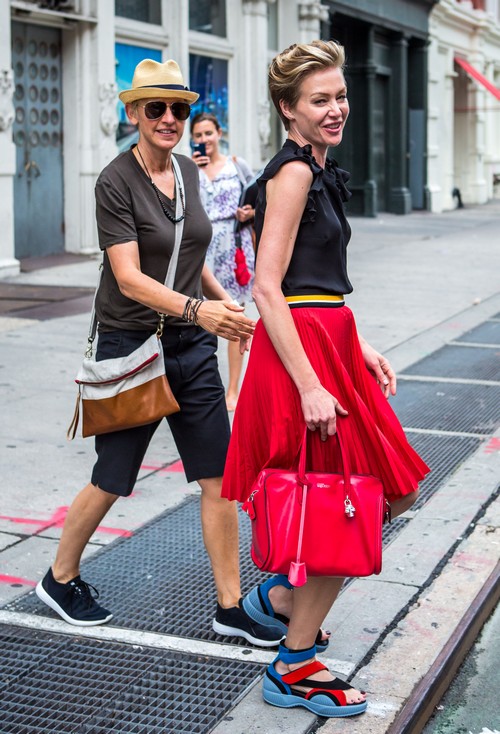 Portia de Rossi secretly attended rehab for one month in May, lending much more credence to all the rumors that she and Ellen DeGeneres were fighting. The tabloids always suspected that something was going on, but their stories always leaned towards the outlandish. They claimed that Ellen and Portia were simultaneously cheating on each other with younger women, and that they were fighting over having a baby. In the end, it just turned out to be substance abuse issues, which plagues more than a few relationships in Hollywood.

Portia reportedly spent thirty days at the Malibu Passages rehab center, with Ellen visiting her every weekend. However, the two managed to keep the rehab visit fairly silent from the press until now, which means that they were probably working through their other problems as well. A substance abuse issue doesn’t crop up out of nowhere, especially not with the medical history that Portia has. For those who don’t remember, Portia was actually diagnosed and rehabilitated for an eating disorder in 2000, when she dropped down to a scary 80 pounds.

She’s since recovered from that issue with a lot of guidance and support from her family and friends, but it’s clear that she’s much more susceptible to addiction than someone who’s never dealt with an ED.

Plus, In Touch also claims that it was trouble in her marriage to Ellen that led to her abusing alcohol. Eventually, their non-stop fighting reportedly turned into an over-reliance on drinking, which forced her to attend rehab to clean herself up. But I don’t think thirty days are enough to deal with the underlying marriage issues that and Ellen are facing right now, and until they figure it out, Portia’s fragile health might not get better.