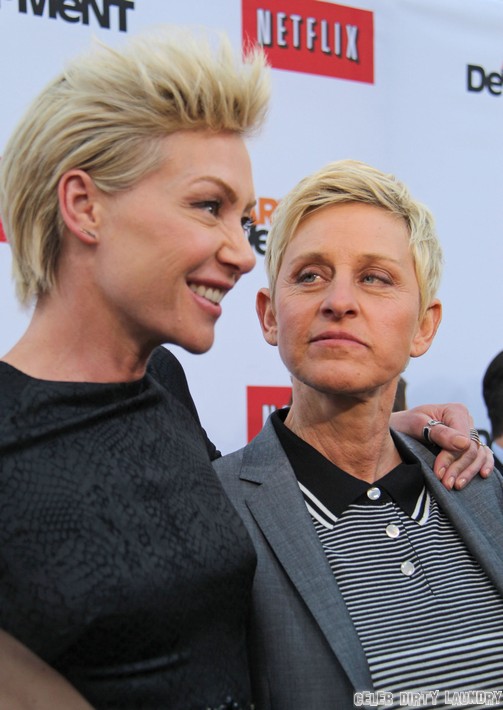 Ellen DeGeneres and Portia De Rossi have been at the center of some fiery divorce rumors lately, and the stories are just not letting up. According to the most recent batch of allegations, Ellen and Portia are divorcing because Ellen has her eyes set on a younger woman.

Forget the fact that Ellen and Portia have been together for almost a decade, and married for almost as long. No, apparently two famous women in a loving relationship cannot be happily married in the eyes of the tabloid world. Then again, when there are THIS many rumors about the same thing, it certainly makes you raise your eyebrows and wonder if there’s some truth to the insanity.

Usually, the tabloids would have given up by now if there was no truth to the divorce and fighting rumors. However, the barrage of sources continue to pour in, although most of these rumors are unsubstantiated. But even with that being said, the fact that these ‘sources’ exist at all is pretty telling. Either people close to Portia and Ellen keep spilling the beans for money, or there’s someone vindictive that’s just out to get Ellen and Portia.

Most of the divorce rumors seem centered around the fact that Ellen’s attention has been wandering towards other women, and how Portia wants a baby but Ellen doesn’t. We have no proof on either of these matters, but those are the two most commonly repeated stories regarding the couple. We’ve been hearing again that Ellen is not completely satisfied with Portia, and wants to date someone much younger. Considering that Ellen is 56 and that Portia is 41, how much of a bigger age difference does Ellen want? Then again, male celebrities usually date actresses and models almost twenty years younger than them, so we really shouldn’t hold Ellen to a different standard – provided that these rumors are even true, of course.