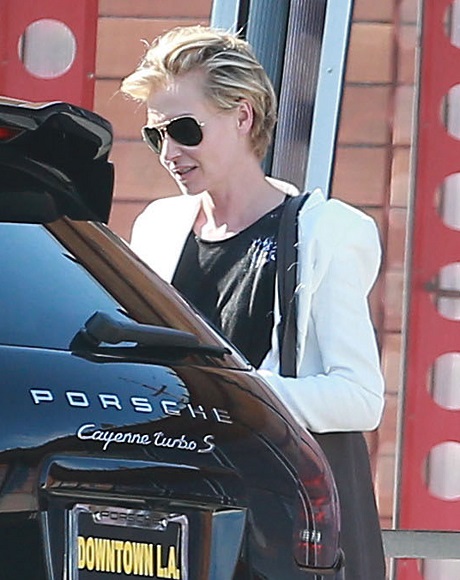 Ellen DeGeneres and Portia de Rossi are still together, although we really don’t know how much longer that’s going to last. However, we do know that Ellen and Portia have had a rough time with their marriage recently, what with Portia’s rehab visit and the ensuing drama.

Certain sources claim that it’s Ellen’s busy career and Portia’s insecurity that led to Portia’s drinking problem and rehab visit, but other sources claim that it was Ellen’s cheating. One thing that all these sources agree upon is that Ellen and Portia’s marriage is running on fumes, and it’s only a matter of time before the two divorce. Even if we can’t verify these claims, the fact that THIS many reports continue to circulate about the divorce lends some validity to the rumors.

Plus, a new report from Life & Style Magazine claims that Ellen’s been intent on getting some plastic surgery, mostly to wipe out her crow’s feet and make her look younger. It’s not easy being a woman in Hollywood, much less a woman who’s about to be newly single. The report from Life & Style also claims that the plastic surgery was Ellen’s mother’s idea, with Betty DeGeneres reportedly insisting on Ellen getting a few touch ups after seeing the unforgiving nature of all those HD TV cameras.

And when Ellen and Portia do get divorced, that plastic surgery will come in handy for Ellen’s rebound relationships. A girl’s gotta do what a girl’s gotta do, right? Especially in Hollywood, where looks amount to 80% of the initial attraction between any couple.