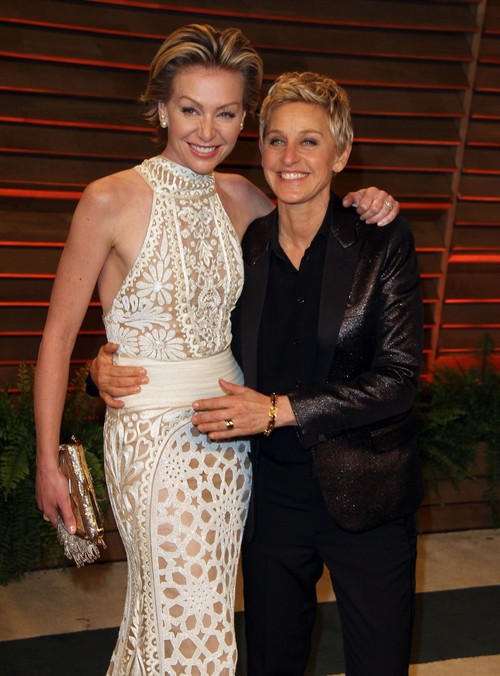 There have been so many rumors about Ellen Degeneres‘ failing marriage to Portia De Rossi, but even now, we can’t definitively say that there is one issue plaguing them. Most of the time, it’s easy to distinguish the cause of relationship issues between a celebrity couples. Usually, it’s affairs and cheating, and if it’s not that, it’s career related. In this particular case, we’ve heard everything from ‘Ellen’s mean’ to them fighting over the furniture in their new home. Basically, it’s all over the place, but what are the actual underlying causes of their relationship troubles – if they even have any?

Let’s say the tabloids are right, for once. I know, it’s a big leap – but when there’s this much gossip surrounding a certain rumor, it’s hard to ignore that it may have a kernel of truth to it. So if we take the fact that Ellen and Portia may be fighting a lot, it has to come down to something. Some sources say that it’s Ellen’s trust and insecurity issues, and that she’s constantly accusing Portia of cheating on her or flirting with other women. Portia, on the other hand, reportedly feels like Ellen instigates a lot of fights for no reason, and she doesn’t like being in such a negative environment. Basically, it’s a lose-lose situation.

There have also been rumors that Ellen is very controlling, which is easier to believe. After all, she wouldn’t have gotten to the level of success that she’s at today without some level of micro-management, especially in running her own show. But while that may have been a solid method for career success, it obviously wouldn’t bode well for her personal life.

Basically, it’s impossible to say one way or another why Ellen and Portia are on the rocks. If the tabloids are accurate and their divorce is coming, we’ll find out soon enough. If they’re not… well, interest will eventually wane and people will move on to gossiping about another celebrity couple.