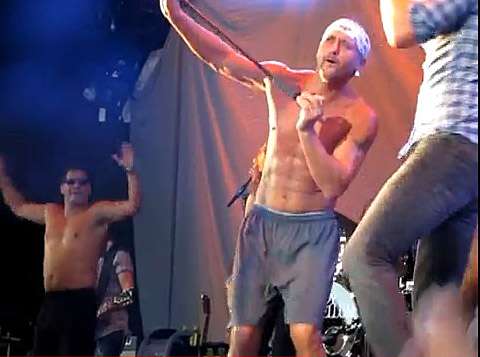 Somehow Faith Hill and Tim McGraw have managed to stay married for 17 years which in Hollywood is nearly impossible. That doesn’t mean that things are easy though- or necessarily good. In fact we have heard that these two have been on shaky ground since last fall. Things were so bad then that Tim took his ring off and there was no anniversary celebration. They then worked together on a residency in Vegas and it seemed to put them on slightly better footing. The problem is once that ended Faith lost her strangle hold on Tim. After years of putting up with his cheating and abusing drugs and alcohol she is now in charge of the family and Tim generally does as he is told. Until he gets fed up.

According to the July 7th print edition of National Enquirer part of the reason that Faith is a control freak is because she fears that if she leaves Tim do as he pleases then he’ll revert back to his old ways. He recently admitted that, while he hasn’t injected drugs he has done everything else, plus he likes to drink until he is falling over. Sources say that Tim was a well known user on the Nashville party circuit and that people just protected him for years because he was famous. It almost cost him his family once and Faith has made it clear that if he falls too far back into his old behavior she will take their daughters and leave.

The problem is that when Faith is so controlling Tim eventually hits a point where he spins out of control again almost out of spite. It has become a pattern with these two and Faith doesn’t seem to grasp that treating her husband like a child ultimately causes him to rebel like one. One fall from the wagon can take weeks to rebound from and then the vicious cycle starts all over again. Do you think that Faith and Tim really even want to be married any more or do they keep it together for the sake of the kids and because they are basically branded together for business? Tell us your thoughts in the comments below!