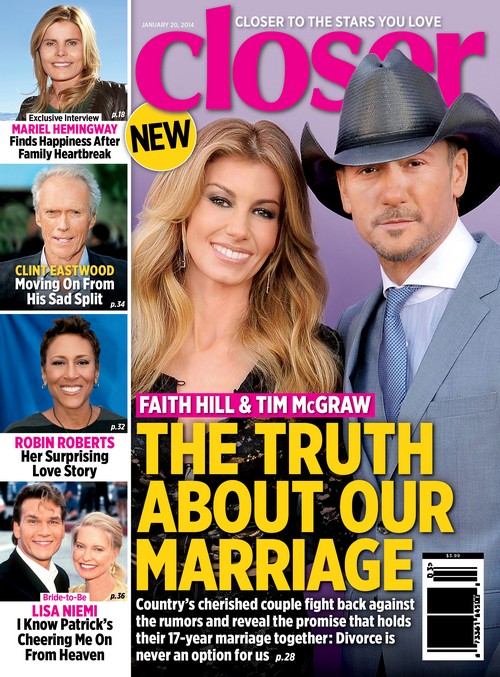 Divorce is not an option for Tim McGraw and Faith Hill. That’s what the latest headline from Closer’s weekly cover issue states. Not that Tim is not cheating on Faith, not that they’re happily married, but that divorce is not an option. That gives us some interesting insight into the state of Faith’s marriage to Tim, doesn’t it?

Whenever couples say that divorce is not an option, that doesn’t mean that there’s no trouble in their marriage. It usually means that they both know what’s going on, whether it be infidelity or something else, but they both unconditionally agree to work through it to avoid divorce. Heck, maybe they have an open marriage. Or maybe Faith doesn’t care about Tim cheating on her. Or maybe they’re just fine. But it’s certainly interesting wording.

Anyway, Faith and Tim are reportedly ‘fighting back’ against the rumors of their marriage breaking down, and they reveal that the reason they’ve made it through 17 years together is because they never consider divorce as an option. So they’re basically saying that the rumors may or may not be true, but it doesn’t matter because they’re not going to get divorced either way.

Closer also has a feature on Clint Eastwood, and how he’s moving on after his ‘sad’ split. Um, I don’t think that Clint Eastwood is all that sad about the split, honestly. I mean, he certainly didn’t take a lot of time moving on, did he?

There’s also a story on Robin Roberts‘ love life and her girlfriend, in addition to a story about Patrick Swayze‘s widow, Lisa Niemi, finding love again.