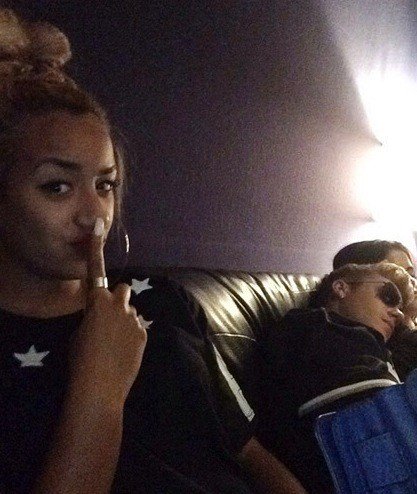 This is why people call Selena Gomez a hypocrite, because she’s just as bad as Justin Bieber and still tries to come off as an innocent little angel. According to Lainey at LaineyGossip.com [at her annual Smut Soiree this year], Selena is on the same level as Justin when it comes to partying and drinking, even though he gets a worse rep than her in the media.

Lainey reportedly gave an example, saying, “Last year Selena and Justin went to Mexico for the holidays, and they were so f*cked up that the cleaning service that had to clean their place said that it was the worst mess they have ever seen… and they had to clean frat parties.”

Poor cleaning service people. Imagine what they must have seen? Guys, I’ve been to frat parties, and they are DISGUSTING. I can’t even comprehend how Selena and Justin – just two people – could have made a mess grosser than a frat party mess. I mean, what could they have possibly done? A hundred lines of coke? Invited a bunch of people over to party and had a drug and alcohol fueled rager? Vomited everywhere? Whatever it was, it seems like they’re each other’s worst enemies. Both of them have their bad habits, but Selena’s just out of control with Justin.

However, next time she tries to act like Justin’s the one making her do all this, maybe we should remind her that she’s a grown-ass adult and can make her own decisions? She can’t blame things on Justin forever, even if she’s done one heck of a job of getting the media to do it for her.

What do you guys think? Are you surprised by Selena’s behavior? Let us know your thoughts in the comments below.