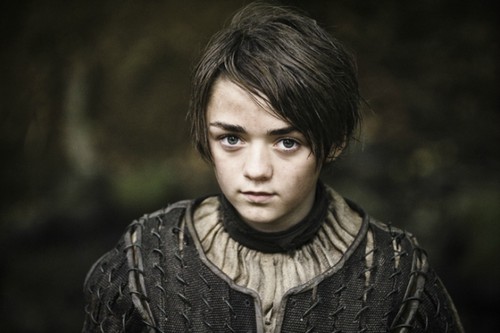 How badass is Arya Stark? Game of Thrones season 5 spoilers might tell us. Seriously, the girl didn’t even flinch while leaving the Hound there to die, even though he was begging her to end his pain. It’s actually a little frightening to see her completely shut off her emotions, although you can’t blame her considering everything that’s happened to her family. For all intents and purposes, she believes that her entire family is dead, apart from Jon Snow.

So really, it’s not a surprise when she tries to head north to the wall. But it also shows her utter detachment at the idea of reuniting with any remaining family when she decides to head to Braavos instead. It was all, ‘Oh, you’re not going North. Whatever, I’ll go where you’re going.’

She convinces the ship runner to let her on by uttering ‘Valar Morghulis’, the phrase taught to her by the infamous assassin Jaqen H’ghar. And off she goes on her adventure, accompanied by a bunch of people that she’s never met before. But that guy who let her on the boat was pretty trusting, huh? I guess people in Braavos have a high opinion of anyone who knows about Valar Morghulis.

Anyway, the show could easily change from the book’s story from this point onwards, but we’re guessing that the writers stick to the broad strokes of Arya’s story. She reaches Braavos, and finds her way to the House of Black and White, where the Faceless Men originated. She trains to become an assassin, and the Faceless Men more or less begin her training by blinding her. I guess that’s their way of testing Arya’s mettle, even though methinks it’s a tad bit cruel. But they’re not called the Faceless Men for no reason, and they make Arya change her identity and spy on other people for them.

Arya does eventually pass all their tests, and she ends up getting her first assassination task at the end of the fifth novel. Since we haven’t yet gotten the sixth novel, we really can’t say where her story goes from there, but we’re guessing that George R. R. Martin is planning on tying it into the larger story somehow? I have no idea how he’s going to do that with this many disparate plot threads, but he claims he knows the ending. Maybe we’d believe him if he didn’t take a million years writing each damn book.