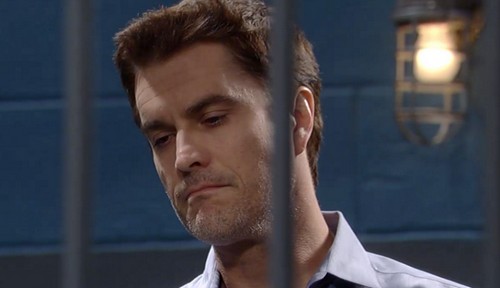 General Hospital spoilers teased for weeks that there would be a mob related shooting in Port Charles this week, but no one was really expecting what unfolded on June 11th. GH fans speculated that Sonny, Julian, or Luke would be involved in any shootings that were going to take place in PC. We all ruled Ric Lansing out seeing as how he is currently being held in Port Charles Jail.

On the June 11th episode of General Hospital, Anna devised a plan to protect Ric from whoever was running the Jerome crime organization and setting him up. Anna headed upstairs and distracted Molly and Liz while Nathan entered Ric’s jail cell. Nathan told Ric, “it was now or never,” and then shots rang out. So, either one of two things happened: Ric decided to steal Nathan’s gun and shoot him so that he could escape from PCPD and not be held for a crime he didn’t commit; or, Nathan shot and killed Ric Lansing for some crazy reason that we are unaware of yet.

Our theory is that Anna and Nathan devised a plan to ensure Ric was protected from the Port Charles mobsters and didn’t have to go before a judge and be convicted of a crime he didn’t commit — all by pretending to shoot him and faking his own death. Anna and Nathan will most likely move Ric to protective custody and hold him there until Fake Luke is arrested and they are sure it is safe to reveal Ric is really alive.

It looks like General Hospital is going to pull an “Adam Newman” and have Ric Lansing watch over his daughter Molly and girlfriend Liz from afar until it is safe for him to return to Port Charles and reveal he is still alive.

What do you think about the shooting on General Hospital? Do you think that Ric attempted to escape and shot Nathan, or are they faking Ric’s death until they figure out who set him up? Share your thought and theories in the comments section below and don’t forget to check CDL tomorrow for more General Hospital spoilers.