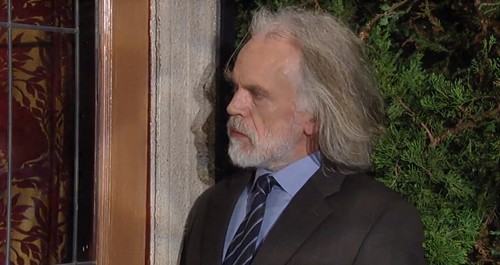 General Hospital spoilers have been teasing all week that the Wednesday November 26 Thanksgiving episode would be one that GH fans did not want to miss. By now most of you have already watched the all new holiday episode of the ABC soap, and you witnessed Alexis and Julian rescue Luke Spencer and take him to the Quartermaine Family dinner to reunite him with his wife Tracy. But, was it the real Luke Spencer that they waltzed in to The Quartermaine house – or was it Fake Luke, AKA Fluke?

It almost seems too easy. After literally months of General Hospital spoilers teasing the Fake Luke mystery, Helena just allowed Alexis and Julian to walk into Miscavige and take the real Luke Spencer home? We would almost have to be fools if we really believed there wasn’t a catch and Luke Spencer was home for the holidays with his friends and family.

After some serious consideration and re-hashing all of the General Hospital spoilers and hints that have been dropped, we’re certain that Alexis just gave Fluke an “in” back into ELQ and Tracy’s life. Thanks to Fluke’s spy Lord Ashton, who was reporting to Jerry Jacks, Fluke knew that Tracy, Lulu, Sam, and Patrick were onto him and there was no way they would believe he was the real Luke Spencer if he returned to Port Charles.

On the Tuesday, November 25, episode of General Hospital, Helena paid the real Luke Spencer a visit in Miscavige and threatened him with a knife and told him they couldn’t have two Luke’s running around town. We have no idea how much time elapsed between Helena and Luke’s chat, and when Alexis and Julian arrived. Helena had plenty of time to have her goons hide the real Luke Spencer in another room, and throw Fluke in to a straight jacket. Alexis arrived to save the day and rescue Luke just as they knew she would – and wound up taking home Fluke. The fact that Julian knew exactly which room to take Alexis to, and decided now to finally come clean is actually a little suspicious. Sorry JuLexis fans, but it looks like Julian is still playing her and working for Fluke – and he helped Fluke get back in to the Quartermaine house.

What do you think General Hospital fans? Do you think Alexis and Julian rescued the real Luke Spencer, or did they just bring Fluke home with them? Isn’t it a little strange that Julian suddenly decided to show Alexis where Luke was being held, do you think that he was in on the Fluke/Luke Spencer switcheroo at Miscavige and knew all along that Alexis was saving Fluke? Let us know what you think in the comments below and don’t forget to check CDL tomorrow for more General Hospital spoilers and news.