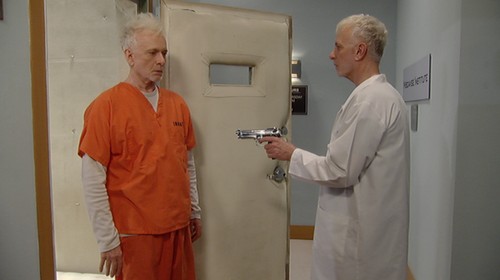 General Hospital spoilers have been teasing the Fluke mystery for months now, nearly a year. And, GH fans have been racking their brains trying to figure out who the impostor is that has been running around Port Charles and wreaking havoc as Luke Spencer – while the real Luke Spencer remains locked away at Miscavige.

Over the course of the last few weeks General Hospital spoilers have revealed that Cesar Faison and Lord Larry Ashton are both involved in the Fluke storyline, and after the November 24th episode many of the ABC soap fans are convinced that Cesar Faison must be wearing another mask and impersonating Luke Spencer. All the signs are there, Faison has been on the loose for a year and has had plenty of time to steal Luke’s identity, he was recently linked to Larry Ashton – who has diagrams of a mask, possibly of Luke Spencer, on a flash drive.

It seems like the General Hospital writers desperately want us to think Cesar Faison is Fluke. But, is he really, or is Cesar just a red herring they are using to try and throw off the audience? Sure, Larry and Cesar might of had a Luke Spencer diagram for a mask on the flash drive. However spoilers are out there saying that in fact Cesar is Larry – this would imply that rather than a mask of Luke, the as yet unseen mask is of Larry!

Let’s not forget that Julian Jerome already told Alexis that when in witness protection he met Fluke. Also that this Fluke person claimed to resemble Luke Spencer (Julian at that time did not know what Luke looked like) and planned to take over ELQ based upon this resemblance to Luke. Alexis asked if Fluke had plastic surgery in order to resemble Luke so closely and Julian’s response was that many in witness protection did in fact have plastic surgery to alter their appearance. On the November 24 episode Fluke proved to Luke he wasn’t wearing a mask by pulling on his own face. So, whoever is running around as Fluke, is not wearing a mask and his face was permanently altered to look like Luke. So, wouldn’t that actually rule out Cesar and Larry since we have seen both of their faces?

What do you think General Hospital fans? Is Larry or Cesar Fluke, or are they just another red herring the writers are using to psych out GH fans? Who do you think the Luke Spencer imposter is? Let us know what you think in the comments below and don’t forget to check CDL tomorrow for more General Hospital spoilers and news.

Soap Opera Spy participants have comments on this Fluke-Luke development:

I think the writers make up as they go along.They don’t know either!!!

I don’t know but I do know that I want our Luke back.

Bill Eckhart is Fluke, he was presumed dead and like Julian and Ric, went into Witness Protection. Bill didn’t need plastic surgery, he is a dead ringer for Luke. Was it just me or did Fluke somehow sound different yesterday?

Bill Eckhart was A nice guy when he was on.

People change, so do characters and writers lol

I still think Bill Eckhart. I can’t believe Luke hasn’t thought of that!
Like · Reply · 2 hours ago

Dawana Vinyard Schrimsher So has everyone figured the obvious out yet?? BILL ECKERT IS THE FLUKE….IVE BEEN SAYIN THAT SINCE DAY ONE.

OK CAN ANYONE TELL ME THE LADIES NAME THAT WAS SENT TO PICK UP THE ELQ SHARES FROM TRACY??

It’s drug on for long, I don’t think people really care anymore. Enough already with dragging out these story lines.

I always thought his name was Luke but I’m not a fan but my wife makes sure I record every episode and she can’t wait to watch….lol

Interesting… gotta love when the writers change things up.