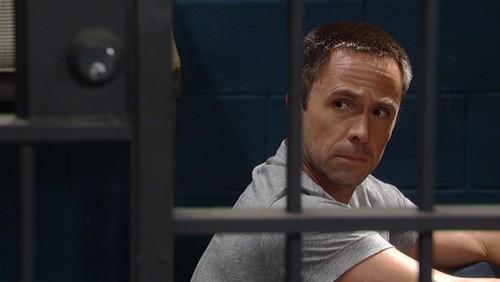 General Hospital spoilers tease another week of exciting episodes during November 24 – 28. Is there ever an uneventful episode of the ABC soap? According to General Hospital spoilers, the Fake Luke mystery goes into overdrive during the week of November 24. Alexis is shocked when Julian finally talks and reveals to her that there are actually two Luke Spencer’s running around Port Charles. Meanwhile, at Miscavige, the Luke VS. Fake Luke showdown continues – and the impostor pulls a gun on the real Luke Spencer (Anthony Geary).

In other General Hospital news, Anna Devane has a tough week coming up. The Port Charles Police Commissioner has some serious explaining to do when she leads the WSB to the location where she and Robert stashed wildcard Cesar Faison – and he isn’t there. As if having Faison on the loose isn’t stressful enough, Anna and Duke go up one side of each other and down the other in round two of their ongoing argument. Whatever Anna is dealing with seems to be contagious, because General Hospital spoilers reveal that Jordan finds herself in a world of trouble as well. Meanwhile, Jordan’s son TJ is not taking the news about his father Thomas and Shawn well at all.

General Hospital spoilers also tease that during the week of November 24-28 the dynamic sleuthing team of Sam, Patrick, Lulu, and Tracy continue their investigation of Larry Ashton – and believe it may somehow be linked to Cesar Faison.

So GH fans, it looks like the Fluke mystery might finally be winding down. Do you want to make any last-minute bets on who the imposter may be? Is Cesar Faison linked to Larry Ashton, and possibly even Fake Luke, well probably not, since that would mean Fluke was flirting with Britt, his own daughter! Will Luke Spencer be able to take down the imposter and get out of Miscavige? Let us know what you think in the comments below and don’t forget to check CDL tomorrow for more General Hospital spoilers and news.