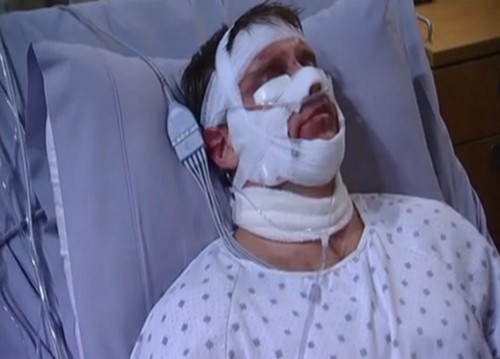 General Hospital spoilers confirmed a few weeks ago that The Young and the Restless alum Billy Miller had indeed signed on the ABC soap opera to play the part of iconic character Jason Morgan, however details were few and far between as to when Billy Miller would actually make his big debut. Up until now Jason Morgan has been a faceless, voiceless man since he escaped from Crichton Clark, and the producers creatively only showed side shots of his head or back. However, on the Wednesday October 1st episode of General Hospital, fans went in to a frenzy on social media when they finally showed Billy Miller’s face (half of it was covered in bandages though).

So far no one in Port Charles has any idea the John Doe that Ava ran over with her car is actually Jason Morgan, damage to his face has caused him to be unrecognizable. However, according to General Hospital spoilers, someone unexpected may be the first to realize who the John Doe really is. In the General Hospital spoiler video for Thursday October 2nd, Sam’s toddler son Danny runs off in the hospital and she finds standing at Jason Morgan’s bedside and holding his hand. Of course Sam has no idea what Danny’s fascination is with the patient, because she doesn’t recognize him or realize that it is Danny’s father. It looks like deep down Danny is drawn to the mysterious man though, most likely because they share the same DNA.

The General Hospital spoiler video for October 2 also reveals that Fake Luke’s days are numbered, Dante, Patrick and Tracy are closing in on the impostor, however Lulu is still in denial and is having a hard time believing that her father is capable of such horrible things and has gotten himself back in to the mob. Meanwhile, Sonny and Carly force Michael to leave Port Charles until it is safe for him to return, and Kiki confides in Morgan and fills him in on the attempt on Michael’s life.

So GH fans, did you see Billy Miller’s big debut as bandaged up Jason Morgan? Are you looking forward to seeing Danny bond with his dad, Jason? And, who do you think will be the first to figure out who the mystery patient really is (besides Danny)? Let us know what you think in the comments below and don’t forget to check CDL tomorrow for more General Hospital spoilers.