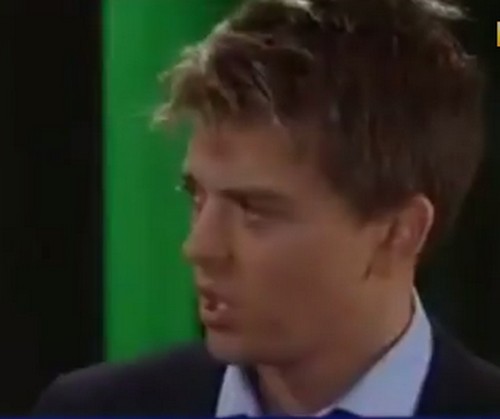 General Hospital spoilers tease that this week will be packed full of more crazy, can’t-miss episodes of the ABC soap. Several GH characters’ lives currently hang in the balance, courtesy of Franco. The ex-murderer turned Carly’s fiance turned murderer again has racked up a total of four hostages, Carly, Heather, Shawn, and Jordan. Being the sick and twisted sociopath that Franco is, he left the door to the locker unlocked and technically they are free to leave, however he hinted that there may or may not be a bomb attached to the door that will be triggered if they open it to escape.

General Hospital spoilers tease that on Wednesday November 12 Dante and Nathan will arrive at the storage room where Franco’s hostages are inside contemplating whether or not they should open the door. In an all new GH spoiler video for tomorrow’s episode, it looks like Dante Falconneri is about to open the door which could possibly trigger a bomb. Now, the odds of TPTB killing off six major characters are pretty slim, so there is a good chance there is no bomb at all or the bomb doesn’t work properly and fails to go off. In a perfect world, the bomb would go off and everyone would narrowly escape except for Franco’s psychotic mother Heather.

In other General Hospital news, the GH spoiler video for November 12 also teases that Nina Clay will receive a visitor. Rumor has it that is Silas, and she called him over to play house with her because she is delusional enough to think that the baby she stole is really her and Silas’s child. And, it looks like Michael Corinthos is about to cheat on Kiki (who h is furious with at the moment), in the spoiler video he corners Rosalie at the bar and asks her to leave with him.

So GH fans, what do you think of all of the craziness so far this week? Is there really a bomb in the storage room? If it goes off, who do you think will be killed? Would the writers really kill off six characters? Will Michael go through with it and really hook up with Rosalie? Who is Nina’s visitor? Let us know what you think in the comments below and don’t forget to check CDL tomorrow for more General Hospital spoilers and news.