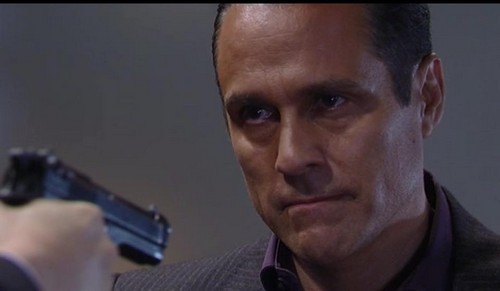 General Hospital spoilers for the week of November 10 tease another crazy week of drama on the ABC soap. Although TPTB have only leaked very vague and cryptic spoilers, news and rumors for upcoming episodes, here are a few hints of what GH fans can expect to see this week.

Monday November 10: GH spoilers tease that on Monday November 10 there will be news of how Michael Corinthos (Chad Duell) makes a life-altering decision, and decides whether he will avenge his real father AJ Quartermaine (Sean Kenan) and shoot and kill Sonny, or let Sonny get away with murder. Meanwhile across town, Jason Morgan AKA Jake takes Liz Webber up on her offer and decides to move in with her.

Tuesday November 11: Detective Nathan West (Ryan Paevey) and Dante Falconneri are on a mission to track down Sonny and have been ordered to arrest him for AJ Quartermaine’s murder. However, General Hospital spoilers tease that on November 11th the dynamic duo of officers find themselves in danger when they walk right straight in to a trap.

Wednesday November 12: GH spoilers reveal that on Wednesday’s episode of the ABC soap Shawn and Jordan, who are still being held captive by Franco and his mother finally come up with a plan and make a bold decision. Meanwhile, Franco (Roger Howarth) frets over what his next move and evades Bobbie’s questions – most likely about the whereabouts of her daughter Carly.

Thursday November 13: We all know Nina Clay is certifiably insane, but according to General Hospital spoilers, Nina will reach a whole new level of crazy on Thursday’s episode and prove just how delusional and out of touch with reality she is. GH spoilers also tease that on November 13th both Carly (Laura Wright) and Kiki are in for a shock.

Friday November 14: While all hell has been breaking loose in Port Charles, Britt (Kelly Thiebaud) and Nicholas have been playing house at Wyndmere without a care in the world, until a shocking guest pays them a visit on Friday November 14th. General Hospital spoilers also tease that Liz and Jake (Billy Miller) will share some heartfelt scenes as she tries to help her new roommate jog his memory.

So GH fans, is Michael going to really shoot and kill Sonny? What trap do you think Nathan and Dante walk in to? What is Nina’s next step now that she has Ava’s baby? Will Franco kill Carly? Let us know what you think in the comments below and don’t forget to check CDL tomorrow for more General Hospital spoilers and news.