The drama is really heating up on ABC’s daytime drama General Hospital, and according to GH spoilers it is only going to get crazier. The Port Charles Police Department has their hands full busting the drug deal on the pier, arresting Julian Jerome, determining whether or not TJ’s Mom Jordan is really an undercover agent, and tracking down the gunman that tried to assassinate Lucas. And, according to the latest General Hospital spoiler video, there is plenty more drama to come.

Fake Luke already put out a hit on Lucas and then killed his own hit man on May 21, and General Hospital spoilers tease that his reign of terror is not complete. The sneak peek video for Thursday May 22nd shows Luke turning his attention to Tracy’s son Ned and holding him at gun point. Considering how crazy and unpredictable Fake Luke has been as of late, there is no doubt in our minds he could shoot and kill Ned as well.

General Hospital spoilers for Thursday May 22nd also tease that Alexis puts Julian on the spot and orders him to tell her who his boss is. Obviously she wants to know who is calling the shots since she is dating Julian, but from a lawyer’s standpoint she needs to know so that she can help Julian get out of Port Charles jail. Considering Luke just shot his son Lucas, there is a good chance Julian may rat him out. However, Julian may also protect him out of fear that Luke will retaliate and come after Alexis and Sam as well.

Meanwhile Detective Nathan West and the PCPD turn their attention to Sonny Corinthos, and speculate that he may have been the person that put a hit out on Julian Jerome’s family. How ironic would it be if Sonny gets away with AJ Quartermaine’s murder, and then winds up getting arrested for a murder he didn’t commit?

Update: Looks like Luke or Fluke as we call Fake Luke was up to some murder on May 23 based on spoilers but here is what actually happened!

The guard at Lucas’ hospital room just let Fluke in because he is his Uncle. What a mistake….

I hope somebody interrupts them!I also hope Bobbie gets there, I mean what could she be doing that they haven’t been able 2 get a hold of her! Not to mention now that Carly’s back somebody needs to let her know!

Someone come in and catch Fluke NOW before he kills Lucas!

YAY Bobbie saves the day, walks into Lucas hospital room and says, “Luke what are you doing?”

So once again Luke escapes detection! 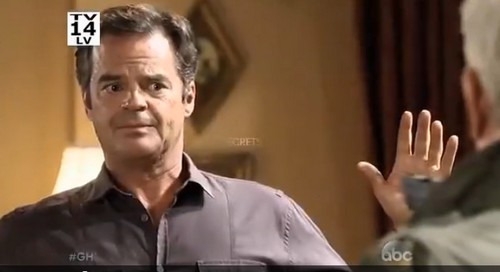