General Hospital Spoilers: Lulu and Dante Free Dr. Obrecht From Jail To Get Their Embryo Returned? 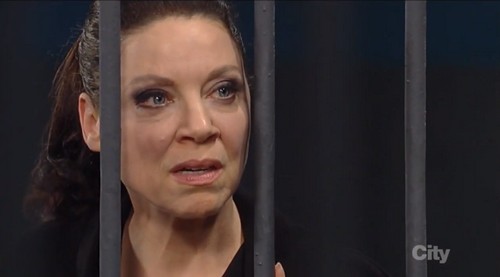 General Hospital has featured dozens of villains over the years, however Dr. Liesl Obrecht may just be one of the craziest women yet, and if Lulu and Dante have their way she will be a free woman just in time for the month of May. Obrecht is currently sitting in the Port Charles Police Department’s jail cell, where she was placed after her arrest for kidnapping Baby Ben/Rocco, holding Liz hostage, and then shooting the nurse accidentally when she tried to escape.

Obrecht being the conniving villain she is, has a back-up plan. The mad doctor revealed to Dante after she was arrested that she has his and Lulu’s other embryo, which happens to be the only chance they have of providing their son Rocco (formerly known as Ben) a little sister or brother.

General Hospital spoilers tease that after some careful consideration Lulu and Dante decide to cut a deal with Liesl Obrecht and try to get the charges against her dropped, which is much easier said than done. First they must convince Liz and Nikolas to drop the charges against Liesl, and then once they have Liz and Nikolas on board they have to plead their case to Port Charles District Attorney Scott Baldwin.

Lulu and Dante are taking a huge risk though, if they get everyone to go along with their plan and are able to free Liesl, there is still a chance that she is playing them and doesn’t even have their embryo. Or, she may have already impregnated someone else with the egg just like she did to her daughter Britt, and someone else could be raising their child. So, Lulu and Dante could free a dangerous woman, for nothing, there is no guarantee she will hold up her end of the deal.

What do you think General Hospital fans? Will Lulu and Dante be able to free Liesl, and if so will she hold up her end of the deal and hand over their embryo? Do you think it is still an embryo, or could Liesl have already impregnated someone else with it? Let us know what you think in the comments below, and don’t forget to check CDL tomorrow for more General Hospital spoilers.

The problem is that with Dr. Obrecht out of jail there is no telling what evil tricks she can get up to. A comment from a Soap Opera Spy fan sums it up:

She can now hurt more people.

What will Dante and Lulu discover after they get Dr. Obrecht freed? You know it won’t be a simple exchange, Freedom for an embryo, right? Besides, on what grounds can the court see fit to give in to Dr. O’s blackmail?